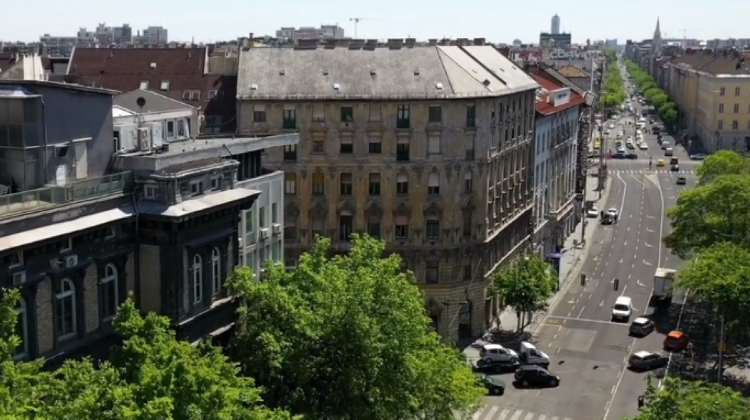 A construction company with good political connections (Heinrich Passage Ingatlanfejlesztő Zrt.) managed to achieve that a 130 year old building in central Budapest partially lost its status as a protected monument.

A recent government decree gave the building project including this court (the Heinrich Court) a special status of “national strategic importance”. This means that the local building regulations in force in the opposition-led district can be ignored.

This group of buildings, including its ground floor wings, at 32 Üllői Road were declared as protected in 2011. Unexpectedly in December 2019 the protected status was ended. Many local residents and a local council member have now voiced their concerns over the planned construction, because they fear that the new tall building would take all the light from other flats. Balázs Sátly local council member of District 8 says that the investor is planning to bulid a 117 room hotel and some 218 flats there.

The plans for the proposed construction project were approved by the local council’s architecture board meeting right after the municipal elections of October 2019, before the new council was set up by the now opposition-led municipal government. The protected status of the building was cancelled in December by a government decree.

The building regulations in this part of District 8 were modified last year but the plans for this building project were handed in before the new restrictions came into force. The plan was approved despite the fact that it had been rejected previously by the Prime Minister’s Office on grounds of heritage conservation requirements.

“The  way the protected status was cancelled is to serve the interest of a well connected investor is against the law. And this is not the first such case. The documentation and the procedure of  the cancelling of the protected status is not done according to the regulations.”

Balázs Sátly, local council member also pointed out  that the Prime Minister’s Office, the Budapest Building Authority and the investor do not provide any information to the opposition-led local government about decisions related to the Heinrich Court.

Sátly informed Átlátszó, that according tot he original building plans the local council would have retained the ownership of an underground passage in the new building and  thus the investor would have needed to take into consideration decisions  brought by the council.

Sátly told Atlatszo he was not sure if these details have been modified but he is convinced that “the special status of strategic national importance” was granted to the project so they can disregard  local building regulations and so the local council representing the interest of locals could not make decisions about the building.

Our sources familiar with the case confirmed this and added that the investor plans to destroy the court wings of the Heinrich Court and replace the court with taller buildings. We contacted the architect in charge of the project but he would not give us more details.

Until September 2019 Zoltán Szabó, a college friend of finance minister Mihály Varga was one of the owners of Heinrich Passage Ingatlanfejlesztő Zrt. Szabó’s other company, Garage Kft,  has been given large public contracts in the recent years. “In today’s Hungary almost nothing guarantees the protection of the architectural heritage from the interest of investors” – one of our expert sources summed up the case.

“The belief is widely held that the leaders of the prime Minister’s office can be persuaded to cancel the protected status of buildings. Some say that even the proposed phrasing of necessary regulations is sent to them and all the minister has to do is sign it. Employees of this office do not dare to protest, so the system works smoothly. As a result there is no protection for listed buildings and no extra costs for investors.”

In the recent years Atlatszo published a number of articles on how the government’s way of handling heritage issues has caught the attention of  the UNESCO World Heritage Committee which has sent a number of advisory and monitoring missions to Budapest.

One of the cases the organisation raised concerns about was the so called MAHART House, a hotel building project of a company co-owned by Viktor Orbán’s son in law, where a special government decree allowed almost the complete destruction of a group of protected buildings in the very centre of Budapest’s World heritage site.