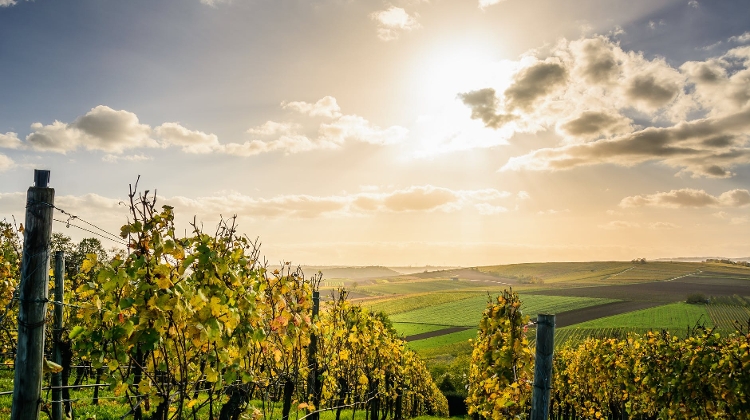 BBJ columnist Robert Smyth’s tour around Hungary’s wine regions this issue takes us to the smallest of the lot, found in Veszprém County, northwest Hungary: Somló.

Approaching this region is a sight to behold as the 435-meter-high Somló Hill, a sawn-off, flat-top volcanic peak, capped off by the ruins of a castle, rises dramatically out of the surrounding plain.

As you get closer, you can see the patchwork of tiny vineyard plots that pack the hill, with press-houses scattered around. Its wines are equally dramatic. Somló may be the smallest of Hungary’s 22 wine regions, but it makes some of the country’s biggest whites.

It is a delight to walk up Somló Hill with its basaltic rock formations. These include the Barát Szikla (Monk’s Rock), which actually does resemble a monk. Further up and to the right of it, the Kőkonyha (Stone kitchen) is where the local hill dwellers used to cook.

Somló Hill was created when the surrounding land was carried away by erosion while the igneous basalt tuff stood firm. The region also comprises two other hills: Kissomló (literally Small Somló) and Ság.

The earth here is predominantly based on that prized volcanic basalt and tuff bedrock. Loess, Pannonian sand, ferrous clay and black “nyirok” soils make up the topsoil.

Subsequently, Somló makes it wines from, for the most part, a quite different set of grape varieties from its lakeside brother-in-basalt.

The region is densely planted with vines on 550 hectares of bijou plots that yield powerful, full-bodied, acid-driven, age-worthy wines from indigenous varieties on perfectly situated vineyards, which often ensure ripe fruit. The region is highly fragmented in terms of the ownership of those plots.

While Somló has the Furmint and Hárslevelű grapes in common with Tokaj, far away in the northeast of country, there’s also Olaszrizling which on its day can certainly match the usually more illustrious aforementioned pair for quality in this terrific terroir.

However, it is the untamed, ultra-acidic yet highly unique Juhfark grape that is pretty much exclusive to Somló and is as distinctive as it rare.

Literally translated as Sheep’s Tail, Juhfark currently accounts for around 12% of Somló’s total plantings, and was once prized for its supposed knack of aiding its female imbibers in the pursuit of conceiving male offspring; Queen Victoria a great fan and frequent Juhfark drinker.

While under-ripe Juhfark can be rustic beyond belief and aggressively acidic, at its best, when it is able to ripen fully on the best sites to bring sufficient fruit to counterbalance that acidity, Juhfark has impressive body, structure and substance, revealing distinctive notes of rhubarb, banana and pineapple, and a stony character.

There are also other hidden gems to uncover here, such as Imre Györgykovács’ Nagy-Somlói Tramini 2017, which flies in the face of the assumption that you can’t make high quality wine from this aromatic grape.

The hand-picked Tramini, which is always the first grape to be harvested, in order to preserve all important acidity, went into the old Kossuth press, which meant no sleep for Györgykovács, who tightened it every hour throughout the day and night.

Spontaneously fermented in old barrels, it certainly does capture the rosewater, lychee and floral aromas associated with the grape, but without overpowering the olfactory senses. Then, it gives and gives on the sublime, structured and very long palate that balances out the aromatic appeal of the nose.

It is currently on sale with a 30% reduction at HUF 4,300 a bottle from Bortársaság; I expect that few consumers expect Tramini capable of producing fine wine. Györgykovács has been gradually selling off his plots as he moves towards retirement and his remaining wines are to be savored while we can.

In addition to excellent white wines and an award-winning Syrah, the Kreinbacher winery also makes the finest traditional sparkling wines in the country. Having now completed nine harvests, Kreinbacher has a whole host of base wines to play with when blending, some of which come from further afield.

Kreinbacher’s Prestige Brut is 100% Furmint and spent a lengthy 24-30 months on the lees as part of the second fermentation in the bottle. It is yeasty with lots of brioche and biscuit notes, from the autolysis, whereby the lees integrate with the wine, though there is lots of juicy quince to give the wine real substance and drinkability, on top of its complexity (HUF 5,900 from Bortársaság).

As with most wineries, Kreinbacher decided to close the doors on March 20 due to COVID-19, and only started to welcome guests again on May 29. Cellar visits and tasting are going ahead, although with limited number of participants and extra care.

Thankfully, the whole of its hospitality team has been kept on while Accent Hotels, which operates the Kreinbacher designer hotel, has established its exacting Always Clean Program to ensure guests’ health.

The first weekend of the reopening (the Pentecost long weekend) saw a full-house and many á la carte guests in the restaurant, which is very spacious with a good distance between tables, as well as a terrace. Meanwhile, similar occupancy is expected for weekends with plenty of bookings from the springtime that guests wish to reschedule now.

A great place to gain an overview of Somló wines, and of wines from the wider volcanic world in general, is the Somlói Borok Boltja (located on the south side of the hill), run by the inimitable Eva Cartwright, who is a fountain of knowledge on volcanic wines.

She has between 20 and 40 bottles of wine open for sampling by the glass at any one time, and a total of 180 wines by the bottle (she’ll open anything for a group of 10 or more people). Flights of wine can be arranged on request.

Somlói Borok Boltja is having its Midsummer Night tastings from 10 a.m. on June 19 to midnight on June 21, with Feri Tar of FineWines bringing wines from around the world.