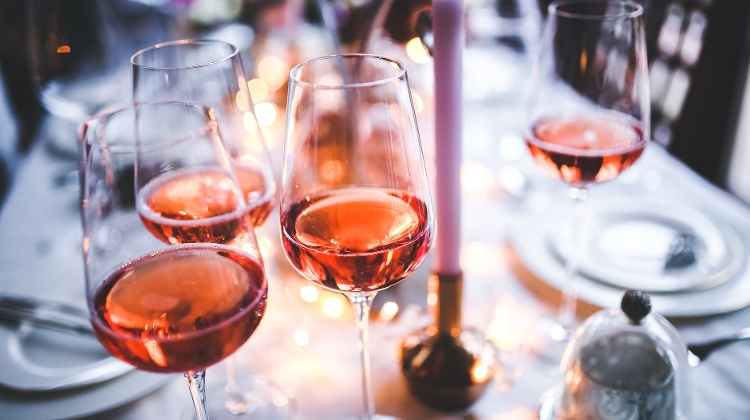 Hungary is currently awash with rosé, a wine style in which the country’s vintners generally excel, often by skillfully channeling the crispy acidity and succulent red fruit of the indigenous Kékfrankos grape into the glass.

For many years Hungary has pumped out millions of hectoliters of well-made, easy to drink, fruity rosé that’s at its peak pretty much as it hits the shelves and is meant to be sipped during the spring and summer following its harvest and vinification.

More recently, increasingly sophisticated rosés are being made that can be enjoyed any time in the year of their release, and for another year or two beyond that.

From the Mátra wine region, near the town of Hatvan, the Nagygombos winery, which cultivates 90 hectares in one contiguous vineyard block, describes itself as a rosé specialist.

It cites factors that are prime for making the pink stuff, such as the cool northern climate that allows the grapes to ripen gradually over the growing season, slowly acquiring flavors while preserving their substantial acidity (essential for rosé), and the lime nyirok clay bedrock with sandy loess soils that also encourage fruitiness, as well as the choice of grape varieties.

Nagygombos, where the wines are made by Anna Barta (her father, Károly, is the owner of Tokaj’s prestigious Barta winery), has released a trio of rosés from the 2019 vintage that all show nice nuances of the wine style, with the first two being ideal for imbibing on hot summer days, and vinified fully in stainless steel.

The pale salmon-colored Nagygombos Játékos Rosé 2019, is a blend of Merlot and Cabernet Franc, with thirst-quenching citrus fruit, especially grapefruit, to go alongside the cherry, raspberry, plus those small red berries with a sour twist, and watermelon.

Its lively acidity is counterbalanced by a touch of residual sugar. It is playful as its name (in Hungarian) implies and a refreshing tipple for hot nights (and days).

The bright salmon-colored Nagygombos Mosoly Rosé 2019, made solely from Kékfrankos, positively oozes ripe strawberry, then raspberry and cherry, and is a good showcase of the grape variety regarding its capacity to convey its fabulous fruit to rosé, with that mouth-watering, tongue tingling acidity keeping it fresh.

These two, which are fun to taste alongside each other (though I prefer the fresh red fruitiness of the latter) cost a very reasonable HUF 1,150-1,200 from Auchan, CBA, Reál and Artizan webshop.

The Mátra-based winery also has a more sophisticated rosé up its sleeve. Nagygombos Borászat Barta Anna Gamay Noir Rosé 2019 is made from the Gamay Noir grape, the French grape that hails from Burgundy and is most widely associated with Beaujolais. It is aged both in stainless steel and oak, with the oak bringing considerable texture and spicy flavors.

More like an oaked white wine in terms of texture than a rosé, but also with a touch of red wine tannin, this layered wine has raspberry and sour cherry, accompanied by complex pomegranate, caramel and yeasty notes. It costs HUF 1,690 from matraiborokhaza.hu.

There are also some rewarding rosé finds to be made around Lake Balaton. From Balatonfüred, the Figula winery serves up a light and suitably zesty Rosé Cuvée 2019 (Cabernets Sauvignon and Franc, plus Kélfrankos and Zweigelt), but it is the 100% Cabernet Sauvignon Bella Róza Rozé 2019 (HUF 4,250 from Bortársaság), made from grapes from Balatonszőlős, which raises the rosé stakes.

Spontaneously fermented; half in oak (steamed, not toasted, in order to avoid woody notes but still enhance the texture), half in tanks. An onion skin color, with orange peel and marmalade notes, it is complex and spicy with great mouth-feel.

It’s made from Kékfrankos and Zweigelt grapes, with a bit more of the former, harvested on two separate dates from a remarkable spot between Sajkod Bay and Tihany’s reedy Külső-tó (Outer Lake), about 200 meters from Lake Balaton.

The grapes underwent whole-bunch pressing and brief settling, then were fermented spontaneously (but separately) in temperature-controlled tanks. After lengthy ageing on lees, blending was carried out in February.

The final wine was bottled in mid-May. It is light and airy, but also really elegant with good mouthfeel and length, and a lovely balance between ripeness and acidity. Expect to pay HUF 3,750 from Bortársaság.

It’s also available in the Szőlősi Kocsma, the now cool and contemporary Balatonszőlős pub (you’ll find it in that town at Fő utca 10), fabulously renewed by Attila Tálos.

This is a great place for eating as well. While on that theme, Tihanyi Vinarius is a strikingly restored wine-themed restaurant overlooking Tihany’s Inner Lake, at Kiserdőtelepi út 15. It was originally built in 1820 by the Tihany Abbey to house its wine cellar and press house.

Franz Reinhard Weninger, an Austrian winemaker who makes wine following biodynamic principles in Balf, in the Sopron wine region on the Hungarian side, and in Horitschon in the Burgenland, on the Austrian side, makes Rózsa Petsovits Rosé; a tribute to his grandmother, who had Hungarian origins.

It comprises Pinot Noir and St. Laurent from the Burgenland and Syrah from Sopron. After a little skin contact, it underwent slow and spontaneous fermentation in concrete vats and used barrels.

This exciting, edgy wine is unfined and unfiltered, very dark for rosé, approaching pale ruby in color, really earthy with juicy sour cherry and raspberry notes, with a wild, untamed feel, almost on the edge of refermenting as Weninger uses very little sulfur. The 2019 costs HUF 3,850 from Bortársaság.

From Szekszárd, the Dúzsi winery has a six pack of wild-yeast fermented rosés (Fajta-Rozé Válogatás 2019), made by Bence Dúzsi, the son of Tamás Dúzsi (also known as “The Prince of Rosé”) from six different varieties and gives the winery’s classic Kékfrankos rosé free as the seventh (HUF 13,900 from Bortársaság).

The grapes for the six come from plots that are being transitioned over to organic cultivation. It is always a joy to sniff out the subtleties of each variety.