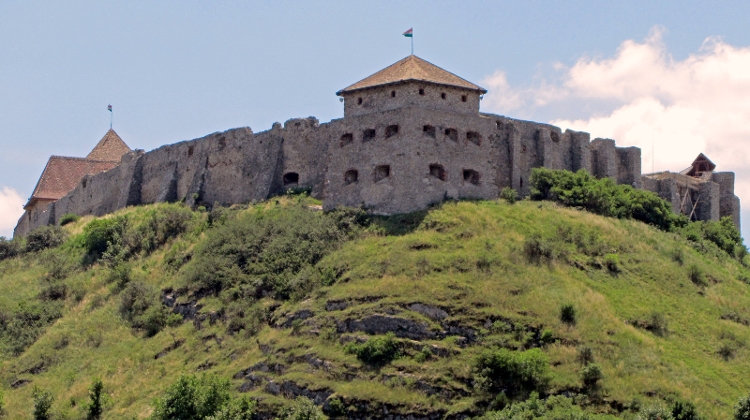 Here's a great weekend break attraction for families, Hungary's best-preserved fortress. There is a family-friendly footpath - with super views - leading up to this special castle, one of the main tourist attractions in the west of Hungary.

It was built before the mid 13th century since King Béla IV lived here for a while during the Mongolian invasion (1241-1242). It was extended several times during successive centuries.

Castle Hill (Vár-hegy) itself is also a special sight as it rises out of the plain. This position made it an excellent site to defend and thus a strong border fortress.

125 metres long and 80 metres wide, the castle is oriented north to south and has an irregular polygonal shape.

After entering the outer castle gates, the walled path leads to the internal gatehouse that opens onto the courtyard.

Outside the gate of the keep is a wolf pit which once had a drawbridge over it. Some of the buildings, such as the Köves Bastion in the north (built by Bishop Köves in 1554) and the Old Tower, have been covered over.

Looking down towards Court Magistrate Square (Udvarbíró tér) from the gatehouse, see the ruins of the strangely named Fort Haversack (Tarisznya-vár). This was not a separate fortress but a tower that probably protected the entrance to the town.

The castle also has a museum presenting its history, next to ancient methods and instruments of punishment, and a collections of sabres and coaches.

During the summer season the fortress is the venue for spectacular shows and 'tournaments' - since 1994 the artists of the Sándor Petőfi Theatre of Veszprém stage plays within the framwork of 'Sümeg Castle Theatre' (Sümegi Várszínház).

By car take Route 84 to enjoy a lovely scenic trip!