'A Leica On Frontline' Photo Exhibition About Vietnam War In Budapest 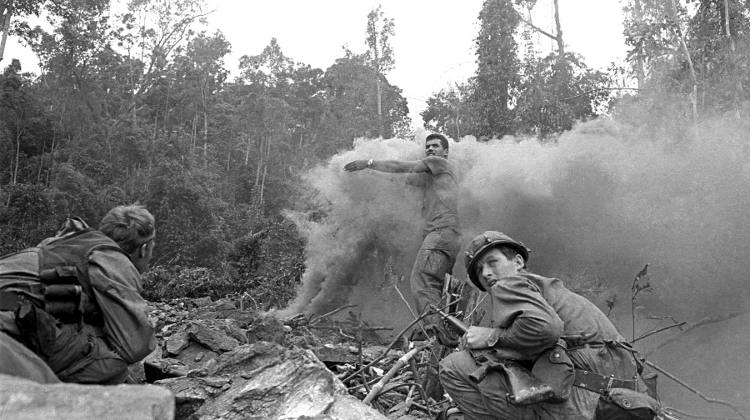 The photo exhibit opens with greetings by Katko Tamas, Art Director Kolta Galeria and a conversation with the photographer will be moderated by Ditzendy Attila, Journalist.

Hungarian born photographer Kondor Laszlo, having lived in the United States for the latter half of the 20th century, returning to Hungary after the fall of the iron curtain - is now 78.

This photographer has spent much of his professional life documenting world events from the US Vietnam War with its inevitable anti-war violence on the streets to the political halls of Chicago‘s Mayor Richard J. Daley (1902-1976. ) Not a stranger to conflict, having survived and fled the 1956 Hungarian revolution.

The Leica on the Frontline exhibition looks at Kondor’s response to the conflicts he witnessed. The trilogy of analog black and white images were created in the late 1900s. The point of departure begins with a selection of work as a photojournalist in 1968 Chicago – The Whole World is Watching.

A counter-reaction is the work as a combat photographer in 1969 -1971 Vietnam – Boots on the Ground.  The finale - Life Goes On includes images that reflect reality, lyrically with empathy and sensitivity for the Vietnamese civilians caught up in the conflict, such as the iconic image Saigon Street Orphan 1970. The exhibition’s 70 works include 20 from the permanent collection of the NVAM, National Veterans Art Museum in Chicago.

“Laszlo Kondor’s photographs of the Vietnam War are essential to the National Veterans Art Museum’s permanent collection. Kondor’s photos capture the inexorable horrors and anxieties of wartime, as well as the enduring moments of camaraderie, empathy, and innocence of both the American soldiers and Vietnamese civilians.

These important images illustrate, first hand, the moments that defined the experience of serving in Vietnam during the war, and that continue to shape the character of our country in the years since.”

Kondor rarely exhibited, the day-to-day pressure of creating photographs for the press, in publications, and in print may explain why.  The photographer was either directly commissioned by one or another magazine or client to produce their photos, or his photo-reports from the front lines of the Vietnam war were published in newspapers.

However, Kondor had an instinct to horde and carefully maintained an archive of work from his 35-year career. Today, retired and living in Kapolcs, Hungary, Kondor is revisiting his archives to select images that illuminate his life in photography.

In September 2020, this exhibit will travel to the NVAM in Chicago with a corresponding documentary film - Out of a Darkroom, the Life of Kondor Laszlo by Endre Dozsa and the publication Kondor Laszlo, as I Saw It - Vietnam Era, edited by Mate Havasi.