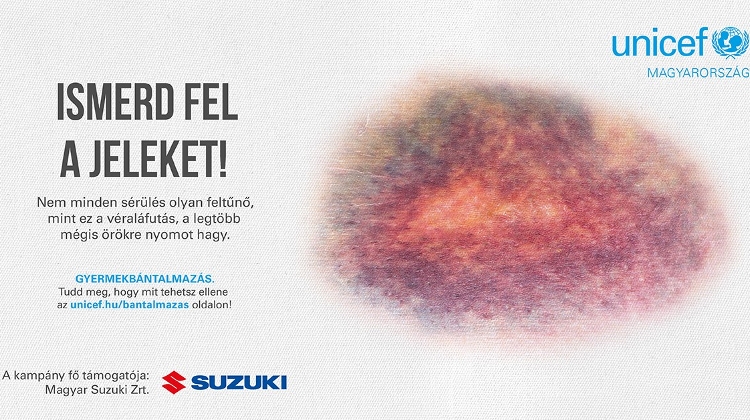 Due to the isolation, fear and existential uncertainty in the spreading of the corona virus pandemic, the world has become an even more dangerous place, especially for children.

According to estimates, the chances that a minor is exposed to dangers and abuses in their everyday life have increased by 30% since the beginning of the pandemic. UNICEF Hungary has launched its “Ismerd fel és tegyél ellene” (Recognize and Do Something About It) campaign against child abuse in order to highlight the fact that child protection is a shared responsibility of our society.

The main sponsor of the program is Magyar Suzuki Corporation.

38% of Hungarians think that a slap in the face does no mean harm to a child. The same percent agree that children have obligations in the first place rather than rights. The majority (66%) thinks that parents have the right to check their children’s phone and personal messages.

Results show that according to the Hungarian people deprivation of love (74%) and ignoring the child (63%) are the most abusive forms of behaviour. However, significantly less people think of verbal insults (30%), phone confiscation (14%) and grounding (20%) as an abuse. (*1)

“Based on the results above, there is still a lot to do regarding the attitudes towards abusive behaviour. We would like to shape our society’s mindset and foster a more conscious behaviour towards our children, that’s why we have launched the Recognize and Do Something About It campaign”, said Antónia Mészáros, CEO of UNICEF Hungary.

"The participants of our educational project can attend a free online mini course about child abuse and its forms, and they can also find an informative child protection guide on UNICEF Hungary’s website”, the CEO added the details of the campaign.

“As a leading domestic vehicle manufacturer, safety is very important to us, and not only when it comes to our work, our products or the traffic our cars contribute to. We would like to call attention to responsible behaviour and the importance of our children’s safety both in the online and in the offline world. We must act with attention and care in our everyday lives.

We should consider children as a high priority target group, because they do not yet have a sense of danger, they cannot assess the sometimes severe and dangerous consequences of their moves or they are simply easier to abuse due to their vulnerability.