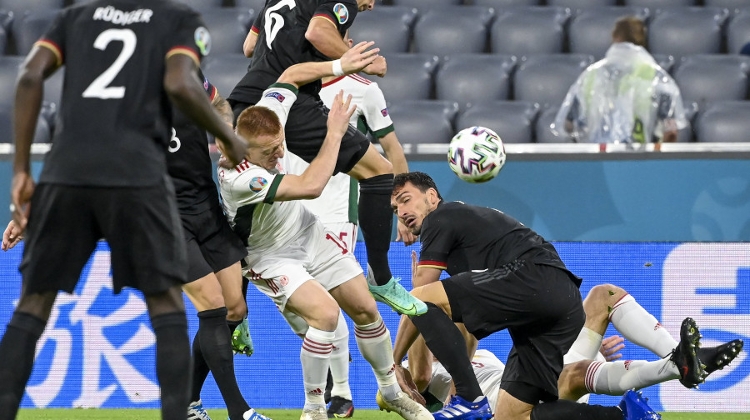 Goals from Ádám Szalai and András Schäfer twice gave Hungary a shock lead over Germany, but the home team found an answer both times in Munich to secure their passage to the Round of 16 and knock Hungary out of the European Championship.

Hungary coach Marco Rossi named an unchanged lineup from Saturday's 1-1 draw with France for their third and final group-stage fixture away against Germany, meaning a 3-5-2 formation with Loic Nego at right wing-back and Attila Fiola in a now-familiar position on the left.

Undoubtedly Hungary were huge underdogs - as ever in this so-called 'group of death' - but they began in sensational style, Ádám Szalai diving to head in Sallai's searching right-wing cross in the 12th minute after the 24-year old had exchanged passes with Kleinheisler in midfield.

Germany centre-back Mats Hummels struck the crossbar with a header shortly after, but aside from that, a plucky Hungary held their illustrious opponent at arm's length and remained dangerous on the counter attack. Joachim Löw's team did manage to equalise through Kai Havertz in the 66th minute, his close-range header into an empty net coming after Hummels had beaten Gulácsi to a free-kick from Joshua Kimmich, but to their immense credit, Hungary hit back straightaway,  Schäfer beating onrushing goalkeeper Manuel Neuer to Ádám Szalai's hooked pass and heading the ball powerfully into an unguarded Germany net.

Every inch of ground in their own half was covered by Hungary as they sought to survive the final 22 minutes but unfortunately Germany substitute Leon Goretzka's low, deflected half-volley skidded past Gulácsi in the 84th minute to salvage a 2-2 draw and condemn a brave but luckless Hungary to 4th place in Group F, and thus an end to their European Championship campaign.

Germany finish behind group winners France and runners-up Portugal, thus progressing to 2nd-round clash with England at Wembley as one of the four best 3rd-placed teams across the six groups.