Hungarian Opinion: To Kneel or not to Kneel, that is the Question 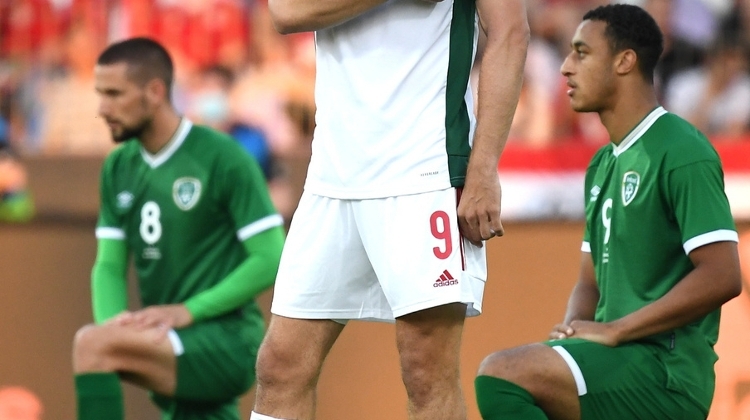 Pro-government pundits welcome the Hungarian national team’s decision not to ‘take the knee’ before their matches at the European Championship.

A left-wing and a centrist columnist acknowledge that the gesture is highly controversial, but nonetheless criticize football fans who booed while the Irish team was taking the knee.

In the last preparatory match before the European Championship against Ireland, the Hungarian squad did not take the knee before kick-off, but instead pointed to the UEFA no-racism logo on their shirts.

Some of the Hungarian fans in the stadium booed when the Irish team knelt down. Ireland football manager Stephen Kelly found that gesture ‘incomprehensible’. Prime Minister Orbán said that taking the knee other than to propose marriage, in church, or at national anniversaries is ‘alien to Hungarian culture’.

Hungary never had colonies, he added, and from a Hungarian cultural point of view, the expectation to kneel down is a ‘provocation’.

Magyar Nemzet’s László Néző brands taking the knee at the UEFA European Championship matches an absurd stunt. He suspects that the symbolic gesture of kneeling down is intended to generate a sense of guilt.

The pro-government commentator contends that the real compensation for slavery would be handing back the fortunes made from slavery to the descendants of former slaves.

He goes on to remark that Hungary had nothing to do with slavery, and he therefore finds it justified for the Hungarian squad not to take the knee, but instead point to the UEFA anti-racism slogan printed on their shirts.

Magyar Hírlap’s Pál Dippold harshly criticizes the Democratic Coalition’s Péter Niedermüller, Mayor of the 7th district in Budapest, who in a Facebook post condemned as shameful the behaviour of the fans who cheered the national team’s decision not to take the knee, and jeered the Irish squad when the players knelt down.

The pro-government columnist accuses liberals of jumping on the bandwagon of ‘the idiotic BLM’, which Dippold considers a racist, anti-white, militant hate organization. In an aside, he claims that at this moment, nine million people in Africa are kept as slaves – by blacks.

In Népszava, Péter Németh condemns those fans who booed the Irish squad taking the knee, but at the same time, he also recalls that according to UEFA rules, its events should not be used for political purposes.

Nevertheless, he continues, the organization approved taking the knee, despite the fact that this gesture has been popularized by Black Lives Matter, a political movement. Németh goes on to criticize the Hungarian Football Federation for taking UEFA by-laws too seriously, and forbidding Hungarian players to take the knee for the Hungarian national team.

Németh acknowledges that the Hungarian Football Federation supports UEFA anti-racism initiatives, but still thinks that it could fight racism more efficiently if it allowed Hungarian players to kneel down.

On Azonnali, Gábor Balogh finds it justified that the Hungarian national team did not take the highly controversial knee. He finds the fans’ reaction offensive and vulgar, nonetheless, even if kneeling down is ‘an empty gesture of political correctness’ by the Irish team, bearing in mind that Ireland had no colonies, and was itself a quasi-colony of England.

Balogh also goes on to criticize Niedermüller for suggesting that the rejection of kneeling down amounts to embracing racism. Balogh writes that Hungarians, including most supporters of the Left, cannot identify with the knee – or identity politics in general.