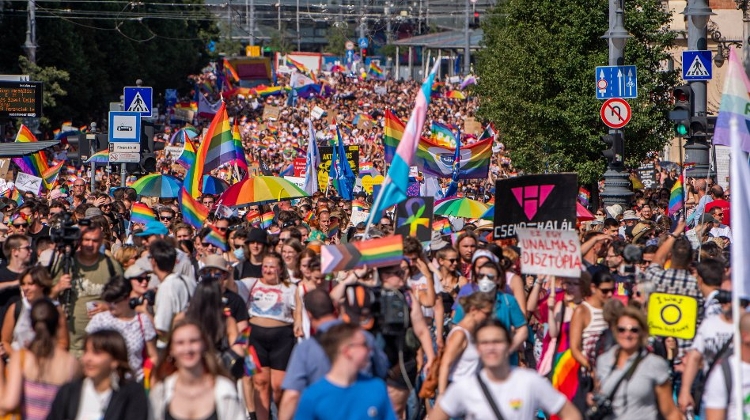 The 26th Budapest Pride Festival wound up on Saturday with a march organised with the slogan “Claim back your future!”.

A number of counter-demonstrations took place at the same time. The march started at Madách Square, in the centre of the Pest side of the city, and ended in a park in Tabán, on the other side of the river Danube on the Buda side.

Prior to the march, Ádám Csikós, one of the Budapest Pride organisers, said the LGBTQ community has been impacted by an “unprecedented disenfranchisement”.

He stressed they would not allow themselves to be treated as “second-class citizens” and acknowledged the courage of all of the marchers.

Before the march, the organisers said the event was intended to “respond to the anxiety and apathy present in society”, adding that “the best answer to this is community action”.

The organisers said the march is also a protest against the “homophobic propaganda law”, “the constitutional stigmatising of transgender people”, “the ban of legal conversion” and “homophobic, hateful public discourse”.

A giant rainbow flag as well as smaller ones were carried by marchers. Banners of the opposition Socialist, DK, Párbeszéd and Momentum parties could also be seen among the crowd.

At the end of the march, Budapest Mayor Gergely Karácsony said he joined the event because he cannot bear politics “that want to make people more and more wicked every day” and because he serves a Budapest that is “diverse” and “inclusive”.

As a Christian, Karácsony said he knows everybody is made in the image of the Creator.

“Although we’re not all the same, we are equal,” he said, adding that “as long as everyone isn’t free, nobody is free”.

Ahead of the march, an organisation dubbed European Patriots United held a demonstration on the corner of Andrássy Avenue and Bajcsy-Zsilinszky Street, a busy intersection not far from the start of the Pride March.

There, Tamás Gaudi-Nagy, the managing director of the National Legal Defence Service, said “globalist forces want to make a colony of the country of the Holy Crown” and “sexual deviants are their vanguard”.

János Volner, an independent lawmaker and the head of the Volner Party, urged everyone to participate in a referendum on child protection initiated by the government.

He pressed them to support “the defence of healthy families” and oppose “LGBT propaganda”.