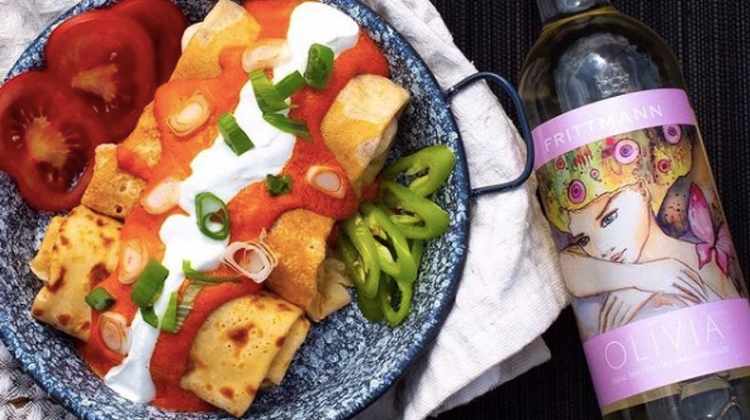 A simple yet delicious meal with a new release white blend – an ideal summer pairing.

In spite of the rumors, the name of the grape was not sold for money (by the breeder who was reported to be a gambler).

The story is false, the breeder, Pál Kocsis gave the name of this cross – between Pozsonyi Fehér and Csabagyöngye – in honour of a wine merchant friend’s son.

The Frittmanns had an idea: the family winery in Kunság wine region has been working with Generosa, a less known variety for a long time.

So the Frittmann guys blended Irsai Olivér with Generosa, and thus Olívia was born!

The wine is charming, intense on the nose but not overwhelming, like a gracious young lady.

Refreshing, juicy and the aromas of ripened grape linger on in our mouth.

The two varieties work together perfectly, the result is a super balanced, wonderful summer wine!

More about Irsai, Generosa and other Hungarian grape varieties

Traditional or not? The story of a recipe

The crepe style pancakes filled with finely cut “csirkepaprikás” or veal stew is known as Pancake a la Hortobágyi style.

Now, in the era of fine dining awakening, Hungarian gastronomic opinion leaders often despise this recipe, as a result of Communist “fake folklore”.

Indeed, the meal has nothing to do with Hortobágy village, a romantic place with pastures and shadoofs. The name was created for the Brussels World Exhibition in 1958.

However, as food and wine writer Sándor Csíki has pointed out in an article, the recipe is much older, in fact it may go back to the 1860s.

The first written recipe is from 1908 in a cookbook, in that version the pancakes are filled with “csirkepaprikás” (chicken stew).

Now the veal stew version may be more widespread, but the beauty of this recipe is that we can use any leftover meat.

Paprika and sour cream are needed

As said before, it is extremely easy to make this dish, but there are two key ingredients, paprika powder (preferably from Hungary) and sour cream, which is known as creme fraiche in many countries.

The cover photo is from Fald fel, a team to to introduce Hungarian restaurants in cool videos.

The recipe video is available here, but in Hungarian.

Also we recommend Tara’s Multicultural Table recipe and video in English, she has several great recipes with clear instructions.