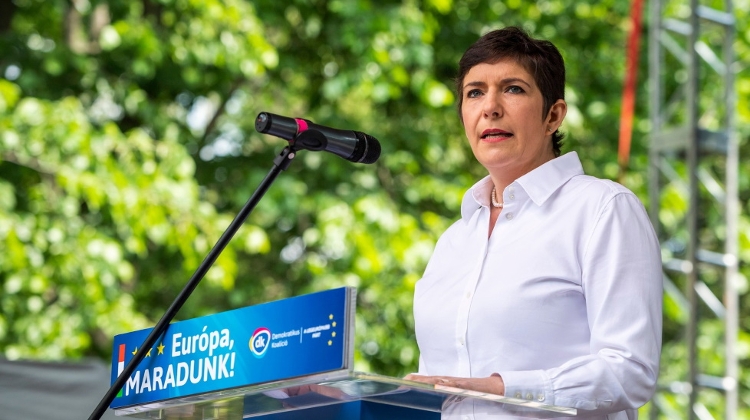 As the second round of the opposition primary opens, Péter Márki-Zay and Klára Dobrev trade accusations of threatening opposition unity and jeopardizing the chance to defeat Fidesz.

Although Gergely Karácsony called on his voters to support Péter Márki-Zay in the opposition primary runoff, several MSZP politicians (originally behind Karácsony) as well as a handful of prominent liberals have endorsed Klára Dobrev in the second round.

Márki-Zay, in an interview with ATV, said that those who vote for Dobrev betray not only Gergely Karácsony, but our homeland as well, adding that Dobrev’s victory would help Prime Minister Orbán to stay in power.

Klára Dobrev accused Márki-Zay of using divisive rhetoric and playing into the hands of PM Orbán, adding that accusing adversaries of treason is a practice pursued by Fidesz. On Monday, Márki-Zay apologized for his statement.

Gábor Török is not at all surprised that the candidates sound harsh in the runoff. The centrist political analyst notes that polarization is necessary in runoffs with two candidates.

Török believes that Márki-Zay wants to distance himself as much as possible from Ferenc Gyurcsány in order to woo the support of voters who want a new government but have strong feelings against Gyurcsány.

The Democratic Coalition and Klára Dobrev, on the other hand, want to create an image of themselves as the cornerstone of opposition cooperation, and mobilize voters who fear that intra-opposition disputes may jeopardize the chances of defeating the current governing parties in April.

Pundits are also divided about the chances of each candidate in the runoff. Népszava’s György Nagy B. suspects that Klára Dobrev is more likely to win, and also that she stands more chance of defeating Fidesz in the April election.

Magyar Hírlap’s Zsolt Sütő-Nagy also expects Dobrev to win, noting that none of the opposition parties with strong networks are campaigning for Márki-Zay.

In 444, Miklós Haraszti, by contrast, fears that Dobrev would be an easy target for Fidesz, who would claim that Dobrev wants to return to the pre-2010 Gyurcsány era. Haraszti thinks that Márki-Zay has a greater chance to defeat Fidesz and ‘end the dictatorship’ by reaching out to right-leaning and undecided voters as well.

Mandiner’s Milán Constantinovits downplays the importance of the opposition primary, claiming that even if Márki-Zay wins, the opposition will be dominated by MPs of the Democratic Coalition – and Ferenc Gyurcsány, their leader.