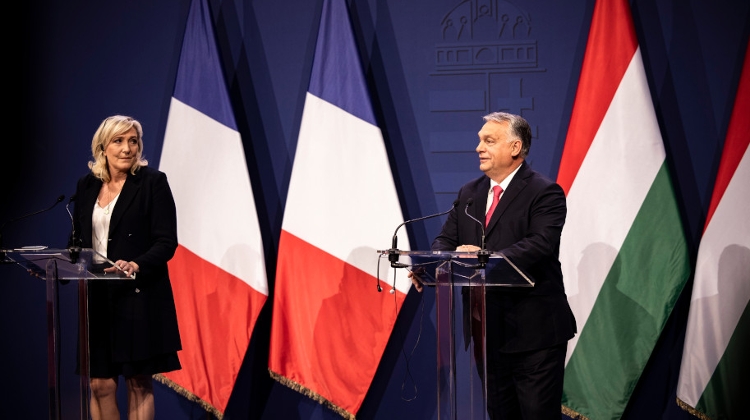 The European Commission has transformed itself from the guardian of the treaties into an ideological centre, with Poland and Hungary experiencing a “modernised form” of the Brezhnev doctrine in the European Union day by day, Orbán told a press conference.

“We were sad to establish that ideological pressure within the European Union has become stronger than ever,” he said, adding that migration and advocacy of open society have been promoted to a degree unseen before.

Under the Brezhnev doctrine, if a member state of the Soviet bloc deviated from the centrally determined ideology, the other member states had the right to intervene in its internal affairs, he said.

Of course, a rule-of-law procedure is a lot less brutal than an intervention by Soviet tanks but it is still an intervention. And this is what both Poland and Hungary are experiencing day by day, he said.

Over the past few years the EP has made repeated attempts “to crucify” Hungary, Orbán said, expressing thanks to Le Pen and her party for standing up for Hungary on every occasion when it was exposed to such unfair attacks.

Prime Minister Viktor Orbán said after meeting in Budapest Marine Le Pen, President of the French National Rally (NR), that they agreed that the EU was facing tough challenges, getting less competitive in the global economy and lacking adequate political influence and strength in the international arena.

Nor is it able to withstand the pressure of migration, and keep soaring energy prices under control, he said. Orbán said they opposed the emergence of any kind of European superstate.

Orbán and Le Pen established that traditional European party structures were transforming all over Europe, and that they wanted to cooperate in this process. He insisted that there is a pressing need for the renewal of the European right wing and that Hungary’s ruling Fidesz has a vested interest in the emergence of a new party group.

Orbán said Fidesz has become “a political bachelor in Europe” because the European People’s Party “has to such an extent become ensnared by the mainstream left-wing ideology” that Fidesz had no longer any business in it.

As regards the new right-wing group, Orbán noted that a key step had already been taken in early July when 15 European parties including Fidesz and NR signed a joint declaration that he said “had broken the ice”.

“Today’s meeting is yet another important step” in building cooperation, he said, stressing the need “to speed up the process in the weeks and months to come”.

Orbán said party alliances created over the past 30-40 years had lost ground, and this is why he is looking for potential new partners.

“Marine Le Pen and her party is such a potential ally,” Orbán said, adding, however, that their talks were yet in an early stage. Orbán said he and Le Pen stated solidarity with Matteo Salvini, Italy’s former interior minister who is currently standing “a rather unjust” legal procedure.

“Salvini is our hero,” he said, adding that the former minister had proved that migration on sea was possible to stop. “Politicians like him should be recognised and paid respect to in European politics, rather than being subjected to legal procedures,” he said.

Answering a question, Orbán said Hungary’s priorities to be emphasised in debates about Europe’s future will include migration, sovereignty and freedom. He said he expected “the intensity of migration waves reaching Europe to change”, but “the wound is still open”.

The issue has not been settled, Europe does not have an answer to the question what it intends to do with migration, Orbán said. “We must make a clean breast of it,” Orbán said and reiterated Hungary’s position that migration must be rejected “as a bad thing” and a country must protect itself against it.

Le Pen: 'Hungary Has Defended Itself and its Culture'

Hungary has managed to protect itself and its culture while dealing with the issue of migration, Marine Le Pen, President of the French National Rally (NR), told an international press conference after talks with Hungarian Prime Minister Viktor Orbán in Budapest.

“Every nation has the right to preserve their constitutional identity and the European Union is only entitled to exercise powers that have been conferred onto it by the member states,” she said.

“Migration must be appropriately handled and must not be allowed to be used as a tool against a member state,” she said.

“My message to the Hungarian people is this: don’t give up, persevere!”

Le Pen said states with a 1,000-year history, like Hungary, must be proud of what they represent. Hungary always fought for freedom, she said, adding that she had paid tribute in Budapest to the heroes of the country’s uprising against Soviet rule in 1956.

“We highly value freedom, all that Hungary has done for freedom throughout its history. The history of Europe is inseparable from freedom,” she said.

On another subject, Le Pen called the cooperation agreement signed by right-wing parties in the summer a highly important step, adding that she “wholeheartedly” supports the agreement.

Le Pen said she wanted to draft “an anti-plan”, one against the European mainstream.

“We want a Europe of nations, we want to cooperate, everyone in their own territory, within the confines of their own borders, together,” she said.