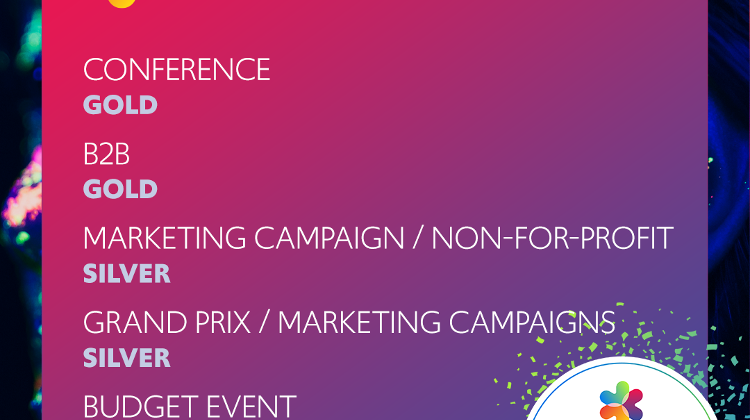 Live events have a certain power, as do professional collaborations. This has been proven by the success of #PowerOfLiveEvents at international award ceremonies.

At this year's EVENTEX, the project received awards in all four shortlist categories and a "Grand Prix" qualification.

Global Eventex Awards is the most esteemed accolade in the world of events and experiential marketing, celebrating creativity, innovation and effectiveness in the industry.

At this year's 11th event, #PowerOfLiveEvents won Gold in the "Conference" and "B2B" categories and Silver in the "Budget Event'' and "Marketing Campaign - Not-for-profit" categories. In addition, the jury awarded the project with "Silver Grand Prix" in the category "Marketing Campaigns''.

"We strongly believe that Budapest can be a key player in the international professional tourism market. For this purpose, it is important to plan for the long term in the current circumstances and to emphasize the unity of the profession towards the market" - said Anna Békefi, Managing Director of Budapest Convention Bureau.

The agency was glad to support the #PowerOfLiveEvents initiative because of its positive and forward-thinking approach.

#PowerOfLiveEvents was launched in 2020 as an online campaign, initiated by Special Effects Ltd. and Visual Europe Group, and became a live event in September. The event was co-organized by Bo - Live Branding Agency and supported by the Budapest Convention Bureau, Budapest Brand Nonprofit Ltd. and the entire event industry.

According to Zsófia Dobos, founding partner of Bo - Live, there is now a huge demand for positive action, and the fact that the project has won numerous international awards is a great motivation for the organizers.

Zsolt Kassai, CEO of Special Effects, one of the initiating companies, said the campaign has resulted in an unprecedented professional collaboration that is exceptional on an international scale.

"With this joint initiative we wanted to show that we firmly believe in live events, the Hungarian industry experts and Budapest as one of the most popular MICE destinations in Europe, and we are just as proud of these things as we are of our results at EVENTEX," he added.

The campaign film "Budapest is ready" can be seenon the video below: