Central Bank in Hungary Raises Base Rate to 4.40% Due to Increased Inflation Risks 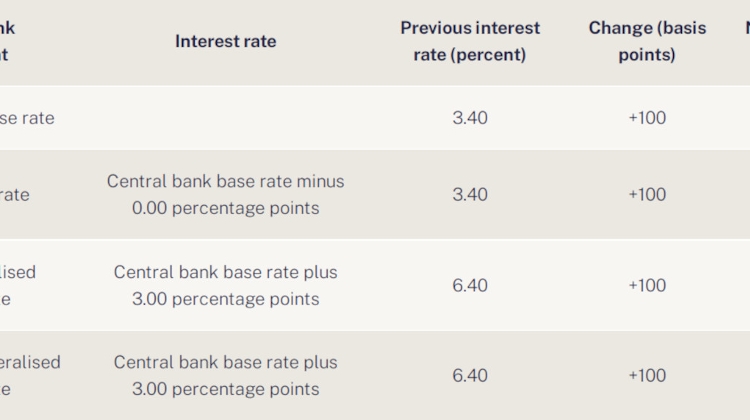 Hungarian rate-setters raised the central bank base rate by 100 basis points to 4.40% at a monthly policy meeting.

The O/N deposit rate and the collateralised loan rate mark the bottom and the top, respectively, of the central bank’s “interest rate corridor”. The base rate is paid on mandatory reserves.

In a statement released after the meeting, the Council said the Russia-Ukraine war has “posed a much higher risk than usual” to the outlook for inflation. The increase in inflation risks warrants a further tightening of monetary conditions.

The Council said strong negative supply effects were likely to raise inflation in the coming quarter, while higher energy and commodity prices boost inflation further on the expenditure side.

Inflation is likely to decline in the second half of the year, the policy makers said, adding that the short-term path of inflation “will depend on the duration of the war, the extent and persistence of sanctions, as well as government responses”.

The central bank raised its average annual inflation forecast for 2022 to 7.5-9.8%, but said CPI is expected to return to the +/-1 percentage point tolerance band around the mid-term 3.0% target in the second half of 2023 and reach the target in the first half of 2024.

The NBH augurs a slowdown in GDP growth to 2.5-4.5% in 2022, depending on the duration of the war and the policy of sanctions.