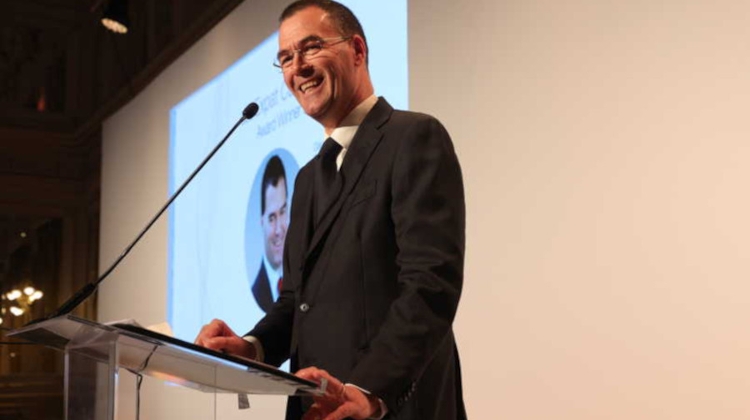 Giacomo Pedranzini, CEO of Kometa 99 Zrt., won the BBJ Expat CEO of the Year Award at the eighth annual Expat CEO Gala, held in the Grand Ballroom of Corinthia Hotel Budapest on March 25.

The gala dinner was attended by many of Hungary’s most important expat and domestic company heads, distinguished guests such as Hungarian Investment Promotion Agency (HIPA) head Róbert Ésik, as well as several ambassadors and diplomats.

The BBJ Expat CEO Award is given to the foreign CEO working and living in Hungary, who is considered to have done the most to contribute to the development of the Hungarian economy and its international recognition. The first gala was held in 2015.

“The BBJ is Hungary’s only English-language economic bi-weekly and has always played an important role in providing information for expat CEOs working and living in Hungary. That is why we decided to found an award to recognize their efforts annually,” explains Balázs Román, the CEO of the Budapest Business Journal.

The Expat CEO of the Year selection process

The winner of the Expat CEO of the Year award is picked by a professional jury of five 30 minutes before the gala starts. This year, the panel consisted of BBJ CEO Balázs Román, American Chamber of Commerce in Hungary CEO Írisz Lippai-Nagy, HIPA CEO Róbert Ésik, German-Hungarian Chamber of Commerce and Industry president András Sávos, and last year's Expat CEO of the Year winner Erik Slooten.

The jury nominates expat company leaders in Hungary for the award based on criteria such as innovative skills, successes on domestic and international markets, being prominent and committed representatives of their mother country in Hungary, and their impact on Hungary’s economic life.

To qualify for the award, the CEO must have lived in Hungary for at least two years at the time of nomination, and the company’s financial results must be positive.

Robin Marshall took the stage just as the appetizers were being served, greeting the guests and reflecting on the war going on in Ukraine.

“No one in this room can be unaware of the terrible conflict taking place in Ukraine. We had considered whether we should cancel this event but decided that, ultimately, we should not put our lives on hold because of the events beyond our control. This remarkable community, you and your people - have responded to a human tragedy in an utterly human way, by working out what you can do to help, and then going out and doing it. Just as you did with COVID. And that is the right response, I think. So, with humility, let’s get on with the evening,” he concluded, inviting Róbert Ésik to the stage.

Ésik noted that HIPA has been a “proud partner” of the BBJ since the first gala in 2015, and noted Hungary’s remarkable recovery from the COVID crisis.

In his speech he also touched upon the crisis going on in neighboring Ukraine, reassuring expat CEOs “We will remain your partner, no matter the circumstances.”

After a Mentimeter quiz game with the participation of the audience, Marshall presented the shortlisted candidates, while paying tribute to past winners.

“Many of our previous winners have been promoted and moved on to pastures new. Others, I am delighted to say, are still with us. Our seven winners have been drawn from six countries, Brazil, Germany, Finland, the Netherlands, Spain, and the United Kingdom. We have had five men and two women. All are remarkable in their own right,” he noted.

Arriving on the stage after the screening of three videos introducing the 2022 candidates, last year’s winner Slooten carried with him an envelope that contained the name of the winner.

He jokingly remarked that he is the shortest reigning Expat CEO of the Year, due to the fact that the 2022 gala was held only roughly half a year after the previous one, which was postponed due to COVID-related restrictions, before calling attention to the refugee crisis brewing in Europe.

“There are many people less privileged than us, and there are many charities that need our support to take care of underprivileged people, including women and children,” he said in relation to the Ukraine Crisis.

After accepting the award amidst thunderous applause, Pedranzini told the short story of Kometa in Hungary.

“In 1994, at the beginning of the privatization process, we were called Kaposvári Húskombinát. At the time there were 15 companies like ours,” he remarked, highlighting the fierce competition at the time. “Today, only four of them remain, but that was the evolution of the sector.”

He also noted that Hungary is a paradise for agriculture and that he is happy that the country managed to reestablish a strong presence on the European stage in the food industry.

Last year, the Expat CEO of the Year Award went to Erik Slooten, then CEO of Deutsche Telekom IT Solutions Hungary. The 2020 winner was BlackRock’s Melanie Seymour, the first British winner of the award. Taira-Julia Lammi, CEO of ABB Hungary Kft., won the award in 2019, becoming the first Finnish winner and the first woman, while in 2018, the title went to Marc de Bastos Eckstein, CEO of Thyssenkrupp Components Technology Hungary Kft. In 2017, it was Jörg Bauer, then of GE Hungary, in 2016 it was Jost Ernst Lammers, of Budapest Airport Zrt. (all three German nationals), and the inaugural award was presented to Spain’s Javier González Pareja, of Bosch Magyarország.