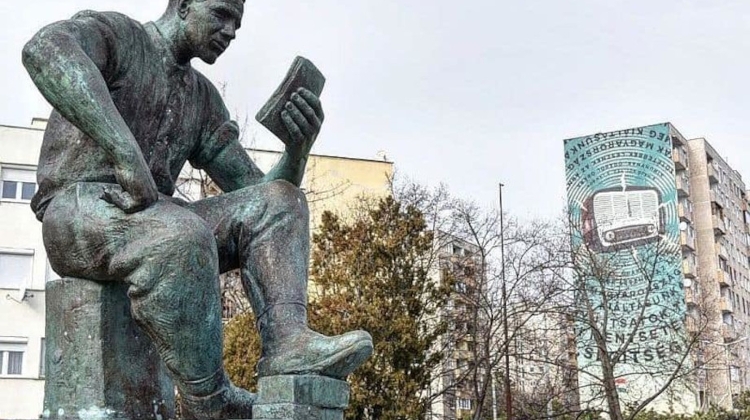 While the Liberty Statue and Little Princess appear on thousands of blogs and Instagram feeds every year, not all of the city’s statues are so familiar. Daniel Cochran from @statuesofbudapest takes a look at the sculptures that didn’t make it into the tourist brochures. 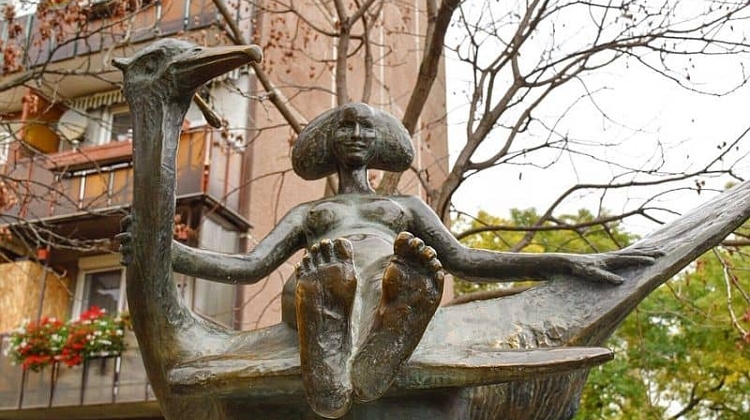 As the panelházak (those concrete blocks of flats common in the suburbs) went up in Budapest throughout the 60s, 70s and 80s, there was a need to “prettify” these rather brutalist estates, and Pál Kő’s, Summer is a good example.

This weird and otherworldly sculpture stands out in a concrete estate – a joyous nude riding an ostrich. This didn’t meet with universal approval from residents – the statue was vandalised numerous times, (including losing the three bronze feathers on the bird’s head and being covered in whitewashed) but it still survives: a little taste of paradise beneath a steel sky. 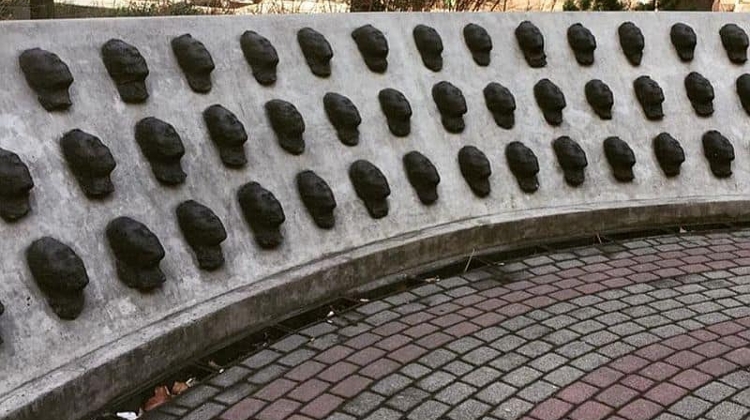 Be careful when walking home past the Magyar Theatre in District VII, because Attila Hetesi’s “Process” is a faceless nightmare after dark. Its rows of blank masks may seem a little chilling: perhaps they represent the many symbolic guises that actors wear during their performances, or maybe they symbolise the erasure of their personality when becoming another character.

Either way, this curious and thought-provoking piece has recently been joined by a Kolodko sculpture so you get two for the price of one (even if it does ruin the effect a little). 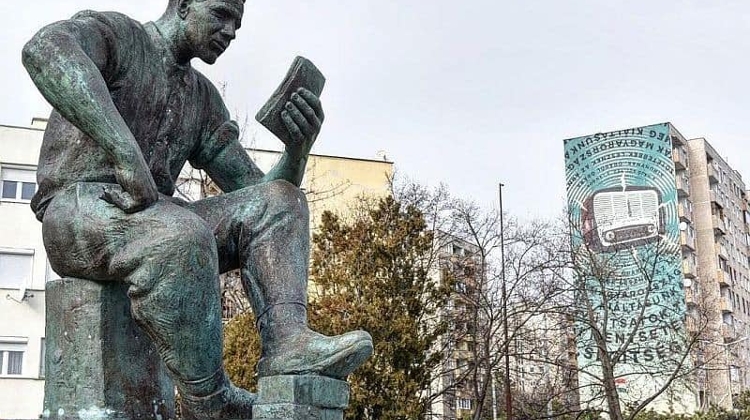 Csepel is a bit of a hidden gem itself, with its stark industrial buildings, unique murals and iconic water tower. It’s also the home of this studious bibliophile – a socialist-era monument idealising the education of the workers.

Literacy rates had fallen amongst the working classes in 1950s Hungary, and statues like this were intended to glorify learning (although what he’s reading is another matter – I’m sure we could make a few educated guesses). Andras Beck’s piece arrived in-situ in 1951 and has remained right opposite the Csepel Football Stadium ever since. 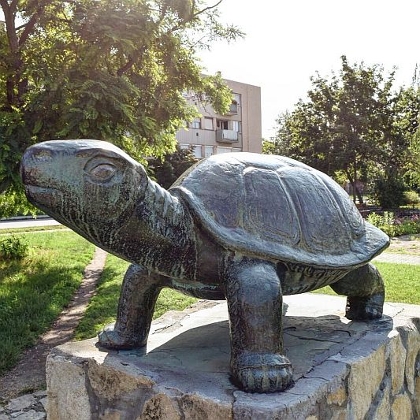 Originally a working fountain but now sadly dried up, this tortoise has been standing stoically in Újpest since 1958. Géza Nagy’s work has seen better days but has managed to hang on (slow and steady wins the race, right?) and refurbishments have been mooted.

The statue itself is interesting enough, but I’d also recommend the area because it’s surrounded by fascinating socialist murals which were painted the same year. Though a little way from the tourist centre, it’s well worth hopping on the bus and checking out the margins from time to time. 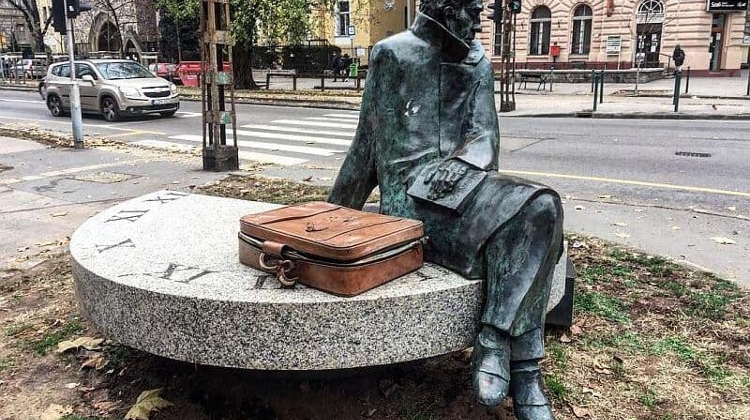 The exiled Anglo-Hungarian author sits hunched in District VI, collar turned up against the cold, sitting on a broken clock representing his famous anti-Soviet novel, “Darkness at Noon” (which was based on his own experiences of imprisonment by a ruthless regime).

Arthur Koestler was a prolific writer on everything from genetics to chess, and was born just around the corner on Szív utca – at times it seems like every building in Budapest has birthed a famous person. Carved and cast by the late Imre Varga, this sculpture captures the essence of this conflicted and migratory figure. 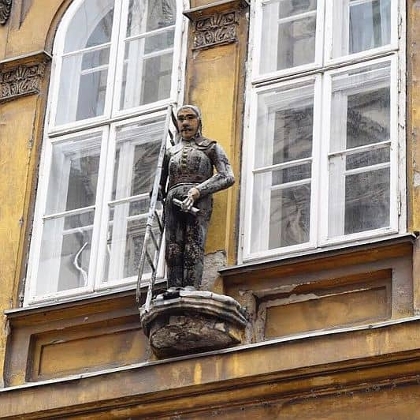 It’s considered good luck to shake a chimney sweep’s hand, and it’s certainly fortunate that this little guy has survived as long as he has. You may struggle to shake this particular chap’s hand though, as he’s lost one over the years.

Although he’s been battered by the elements, this sign of the Devicis family chimney sweep business has endured since the 1850s.

Mihály Devecis was the founder of the family firm, which thrived in the heyday of the “lucky sweep”. Not so in these more modern (and centrally-heated) times, as the house is neglected and the Devicis family long gone. Only this steadfast statue remains of their legacy. 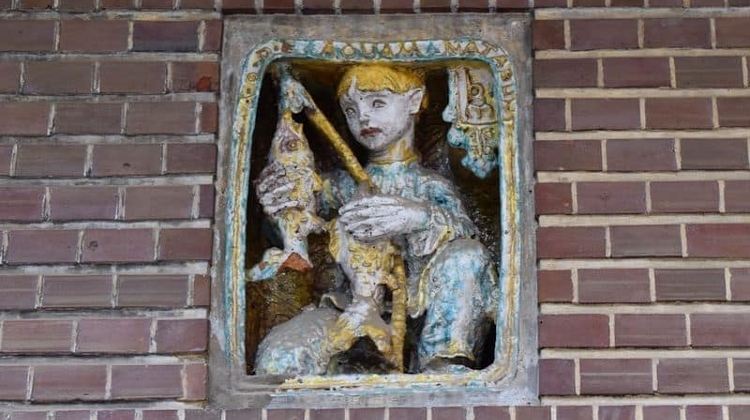 The definition of hidden gems, Margit Kovács’ ceramic alcoves can be found (in various states of repair) right across the capital, often in the most unassuming places.

Inventive, playful and detailed, the works sometimes delve into allegory or religion (like the St. Florian – Katona József street 33.), but are just as likely to be puns on street names (the one on Ponty street (pictured) shows a boy with a fish and – of course – ponty means ‘carp’ in English). There are about eight of these brilliant niches around Budapest and I’m determined to find them all! 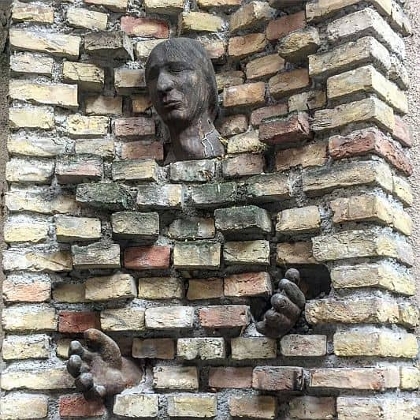 Tucked away in the courtyard of the Roma Civil Rights Foundation, this claustrophobic figure commemorates the great János Bogdán, who campaigned tirelessly for Romani rights and education.

A tragic car accident in 1999 ended his life, but his legacy and achievements live on, chiefly in the Gandhi High School in Pécs where he was the Headteacher.

Despite having a 600-year history in the city, it’s still rare to see Romani representation in the city’s sculptures – but recent developments mean that this may change – keep an eye out in 2020. 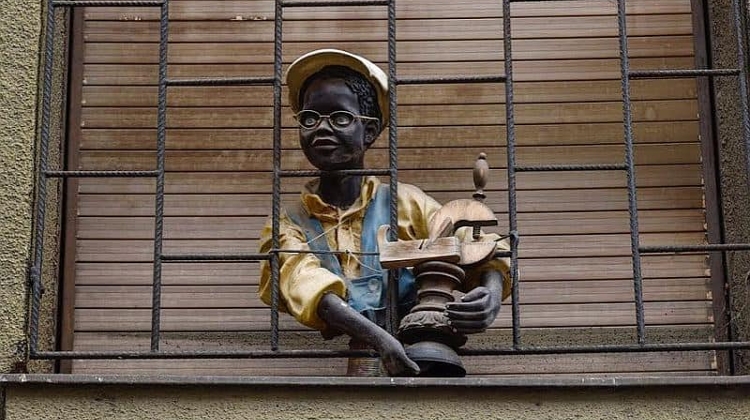 While it was once common for shops to use statues to represent their business, this tradition is dying out a little, so it’s always nice to see an example in the wild.

This young fella represents a local carpentry business and – like the chimney sweep – he’s proudly holding the tools of the trade. It’s easy to miss this one, so remember the number one Budapest rule – always look up! 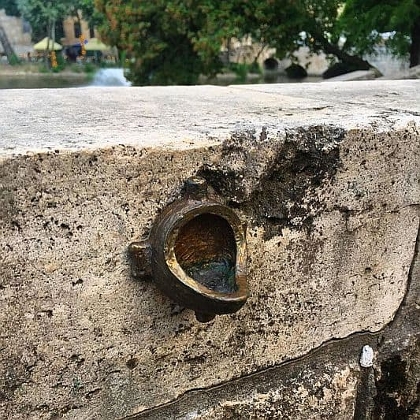 Mihály Kolodko’s been in the news a lot recently for his bold political sculptures, but he also likes to pay tribute to the world of modern art from time to time. In addition to his riff on Jeff Koons’ balloon dog (which can be found near the Little Princess on the banks of the Danube), you can also find this tiny bronze urinal if you look very closely at the walls around the Vajdahunyad Castle moat.

This is a guest post by Daniel Cochran. Daniel is a teacher and local historian from the UK. He runs Statues of Budapest on Instagram and Facebook