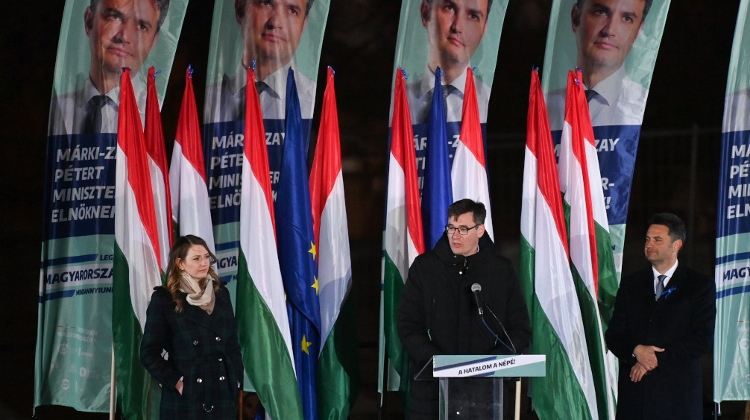 Péter Márki-Zay, the prime ministerial candidate of the united opposition, on Sunday evening conceded victory in the general election to Hungary’s ruling Fidesz party. “I am stunned just like everyone else,” Márki-Zay said at the City Park Ice Rink in Budapest.

“I don’t want to hide my disappointment and my sadness; we would never have thought that this would be the outcome.”

Márki-Zay said the conditions in the election were “extremely unequal”, adding, however, that the opposition was not disputing the result, “only that it was a democratic and free race”.

He said he and his team had chosen to embark on their campaign because they had trusted that “we could still win the election in such uneven conditions, with our feet tied, with a spear in our backs, wounded and mocked.”

Márki-Zay said Fidesz had won the election not through honesty and honour but through “propaganda”.

“Although the thought of leaving the country may occur to every sober-minded Hungarian because the country is not headed in the right direction, we’re staying here with you,” he said on behalf of his family.

“We will continue the struggle that our conscience and patriotism calls us to,” he said, appealing to his supporters “not to let go of each other’s hands”. “Our fight was not in vain, since we’ve created a wonderful community which can’t even be bought with propaganda…” Márki-Zay said.

He said he and his base would “not give up the fight” as “there will be an even greater need for unity in the difficult times ahead”, adding that they would “stick up for everyone facing persecution”. “We will restore this country’s honesty and its honour,” Márki-Zay insisted. “We can show that we have reason to be proud to be Hungarian, even in opposition.”

He thanked his voters and his campaign’s activists, adding that those who had not voted for them were still their “Hungarian brothers and sisters”. “May God protect Hungary and thank you,” Márki-Zay said, concluding his speech.

Anna Donáth, head of the Momentum Movement, asked the opposition activists and supporters present not to give up. “We’re too young to let our futures be stolen,” she said. She said Hungarians would soon have to “face things that no one can endure alone or in a community”. “However much they lie, unbearable times are ahead and this is our future.”

Budapest Mayor Gergely Karácsony, co-leader of the Párbeszéd party, said they would “have to finish what we’ve started together”.

Karácsony said that “if we’ve taken each other’s hand and taken a step towards each other”, they would have to “preserve what’s left of the homeland”.

He said Budapest remained “the island of freedom” and would “continue to fly the flag of freedom and solidarity”.