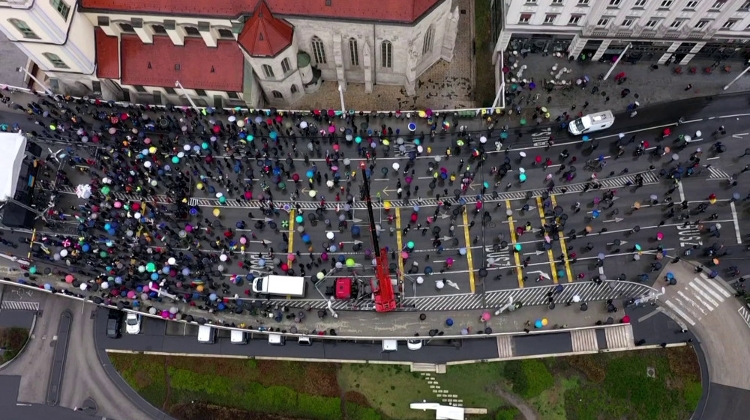 Protesters rallied in support of a free and independent Ukraine and against what they called the Hungarian government’s “balancing-act policy”, in downtown Budapest on Saturday.

The demonstration was organised by a civil group supporting Ukrainian independence at the call of Ukrainian President Volodymyr Zelensky on Budapest’s Szabadsajtó (Freedom of the Press) Road.

Péter Juhász, one of the organisers, said that while civil groups were showing solidarity towards refugees and were doing everything they could for them, Prime Minister Viktor Orbán and the Hungarian government “hasn’t done anything”.

Historian Krisztián Ungváry said Orbán’s position on the war meant the prime minister believed that ideas like national self-determination, liberty and the fight for freedom only mattered if they concerned the ruling Fidesz party.

Ungváry said Ukraine was defending not just itself but the whole of Europe. “Ukraine today is also fighting against the regime of Viktor Orbán because Viktor Orbán and Vladimir Putin are brothers,” he said. “They both reject Western democracy … and are building an illiberal state in its place.”

Csaba Dömötör, a state secretary of the cabinet ministry, said the demonstration was “further proof that the left wants to drag Hungary into war”. In a statement to MTI, Dömötör said that “people close” to opposition prime ministerial candidate Péter Márki-Zay had also spoken at the event.

“It is clear they want to comply with the Ukrainian president’s requests and send weapons to the battlefield, and they would close the gas taps,” the statement said. That would mean that Hungarian families would pay the price of war, he said.

Dömötör noted that Hungary had condemned Russian aggression in Ukraine, and expressed its concerns regarding Ukraine’s territorial integrity, pledging to help everyone in trouble.

“But the Russia-Ukraine war is not our war. We didn’t cause it and do not want to take part in it,” he said. “There is no prosperity without security. The country can only be built further if we preserve security,” he said.