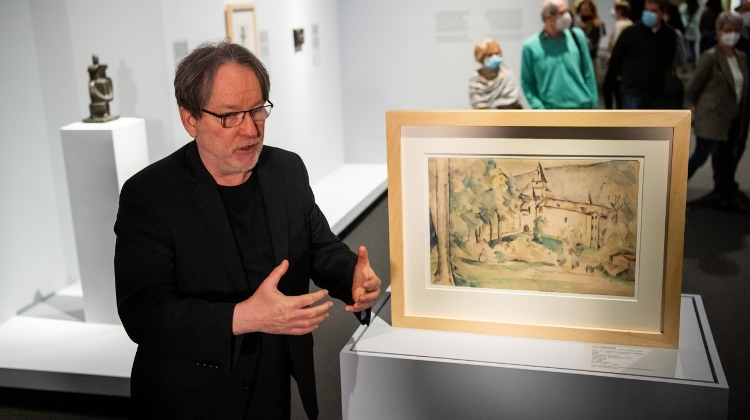 The current exhibition featuring more than 150 works by French painter Henri Matisse will close at the Museum of Fine Arts two weeks later than originally scheduled, on November 1st.

Over 100,000 have visited the exhibition since it opened at the end of June.

The exhibition is the first comprehensive representative show featuring the works of the 20th-century French artist.

A large-scale exhibition featuring works by Spanish-Cretan painter El Greco opens at the Museum of Fine Arts on October 27.

More than 50 works by El Greco as well as nearly 70 works of art in total will be on display.

The Matisse exhibition based on the masterpieces of the Centre Pompidou Musée (national d’art modern) in Paris is the first full-scale show featuring his art in Hungary.

The selection of more than 150 works guides visitors through all the main periods of the artist’s oeuvre - from his Fauve period all the way to his late gouache paper cut-outs.

In addition to the “lightness” manifest in harmonies of resplendent colours, light and forms – which Matisse strove to achieve throughout his art – visitors can get an insight into the fundamental questions of his oeuvre pertaining to space and plane, interior and figures, as well as colour and line.

The exhibition also throws light on Matisse’s work method of revisiting and reinventing themes through variations of motifs – including windows marking the boundary between inner and outer space, objects in his studio, portraits and female figures – arranged in sequences.

The selection of works demonstrate how the colour of ideas – a phrase attributed to Matisse by Louis Aragon – took shape in the course of Matisse’s almost sixty-year-long oeuvre through continually renewing colour chords and linear rhythms.

Visitors are invited on a chronological journey through Matisse’s almost sixty-year-long oeuvre, which can be described as a series of renewals.

After his early period, defined by looking for his own artistic voice and hallmarked by works such as Woman Reading [La Liseuse] from 1895 and Pont Saint-Michel (ca 1900), the artist’s spectacular painting of pure colour unfolds, which was the main aspiration of his Fauve period.

These pieces are represented here by one of the masterpieces, Le Luxe I (1907), made in the period following the “Fauve scandal” of 1905, and by Algerian Woman, painted two years later.

During World War I Matisse’s light-infused paintings with a vivid palette were replaced by darker-toned compositions with a geometrical character and at times balancing on the verge of abstraction.

The chief motif of this period is the window, which simultaneously connects and separates the interior and the world outside, forming a passage between the layers of space.

One of Matisse’s most enigmatic window depictions is Glass Door in Collioure [Portre-fenêtre à Collioure] (1914), which can be seen at this exhibition.

In 1918 Matisse settled in Nice, where he produced a succession of pictures distinguished by harmony and intimacy, with models in interiors infused with light.

This is the first piece in Matisse’s series of paintings depicting odalisques, i.e. seductive women dressed in Oriental clothes.

In these compositions the artist was not so much preoccupied by the orientalising subject-matter but much more in creating a decorative unity between the figures and the interiors.

The 1930s mark another experimental period, during which the female nudes were reduced to forms of virtually geometrical simplicity and transformed in several phases. The marks of repainting and scraping off paint are discernible, for example, on the surface of Pink Nude Sitting [Nu rose assis] (1935–1936), displayed at our exhibition.

Between 1946 and 1948 Matisse created his “Vence interiors”, which are built on the contrasts of homogenous colour fields and emphatic contours and can be called a summary of his painting oeuvre.

After this Matisse almost exclusively made gouache paper cut-outs, displayed in the closing section of this exhibition.

By developing the paper cut-out technique – initially only used to make compositions with but soon applied as an autonomous medium – Matisse was able to find a solution to one of the central problems in his oeuvre, i.e. harmony between colour and line in a new context.

Then he revisited the question on a monumental scale when working on the cardinal work of his last period, his total work of art realised in the Chapelle du Rosaire de Vence.

The second version of the designs he made for the chapel’s stained glass windows, titled Pale Blue Glass Window [Vitrail bleu pâle] (1948–1949), is one of the centrepieces of our show.

Matisse’s extremely rich sculptural oeuvre is presented in parallel with his paintings, while a separate section is devoted to his Henriette portraits and to The Back series [Nu de dos] (1909–1930), the latter being regarded as one of the universal masterpieces of twentieth-century sculpture.

Besides sculptures and paintings, the exhibition showcases Matisse’s original graphic sheets as well as his artist’s book, titled Jazz (1947) – which he designed using gouache paper cut-outs and published with texts he wrote himself – to demonstrate the diversity of mediums in his oeuvre.

The exhibition catalogue contains studies by foreign and Hungarian authors as well as a selection from Matisse’s writings, a significant part of which has been published in Hungarian translation for the first time.