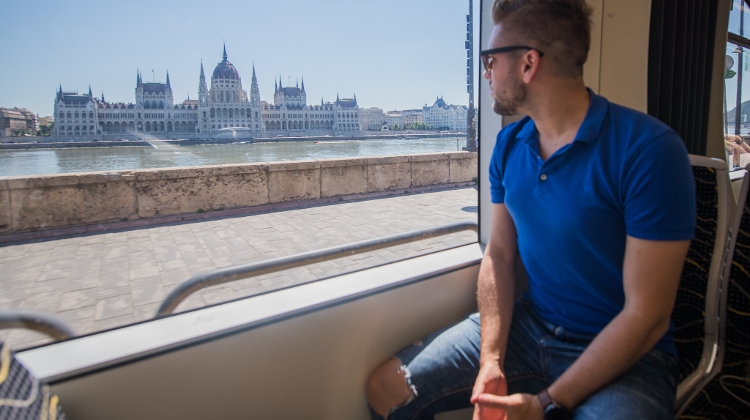 Customers of BKK travelling on the middle route section of tramline 19 - either on Saturday or Sunday between 4 June and 28 August - have the chance to hear about city curiosities onboard the line during the summertime weekends.

The sightseeing tram introducing Budapest attractions provides an exclusive service as a scheduled line between the Kosztolányi Dezső tér and the Margit híd, budai hídfő stops

There are several lines operating citywide that are popular among tourists, such as the Buda Castle Funicular, the Zugligeti Chairlift, the cogwheel railway or even tramline 2, which has been ranked as one of the most beautiful tramlines, due to its unique features.

This list is added with tramline 19, as this line runs on a real panoramic route passing by Budapest’s famous attractions along the Danube riverbank.

Thanks to the cooperation between BKK Centre for Budapest Transport and BudapestBrand, this tramline plays a special role in the Hungarian capital between 4 June and 28 August 2022, as during the summertime weekends passengers have the chance to hear interesting information onboard about the touristic curiosities to be found along the route of the line.

BKK’s customers have the chance to familiarise themselves with information on popular places of Bartók Béla út and Móricz Zsigmond körtér, the Hadik Coffee House, the landmarks of Szent Gellért tér, the Rudas bath, and Várkert Bazár.

Also the popular places that are part of the UNESCO World Heritage Sites to be found in the surrounding area of Clark Ádám tér, the Széchenyi Chain Bridge, the Margaret Bridge, Batthyány tér, among others.

You can get anywhere onboard tramline 19 operating as per scheduled services, however you have the chance to hear information on the most interesting touristic curiosities via the line’s audio announcement system between the Kosztolányi Dezső tér and the Margit híd, budai hídfő stops on Saturdays and Sundays between 10:00 and 12:00 AM and between 3:00 and 5:00 PM.

Customers have the chance to hear the Hungarian and English tour guiding in both directions.

This service can be used in possession of BKK’s any ticket, travelcard or pass.