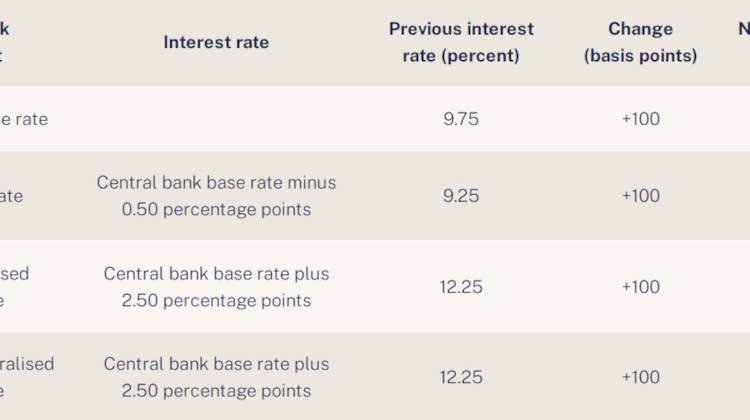 The O/N deposit rate and the collateralised loan rate mark the bottom and the top, respectively, of the central bank’s “interest rate corridor”. The base rate is paid on mandatory reserves.

“The further rise in inflation and persistent inflation risks warrant the decisive continuation of the tightening cycle,” the Council said in a statement released after the meeting.

“The [NBH] continuously monitors developments in financial market risks as well and stands ready to intervene in a decisive manner using every instrument in its monetary policy toolkit, if necessary,” the policy makers added.

The Council reiterated that the tightening cycle will continue “until the outlook for inflation stabilises around the central bank target in a sustainable manner and inflation risks become evenly balanced on the horizon of monetary policy”.

At a press conference after the meeting, NBH deputy governor Barnabás Virág said FX swap tenders providing euro liquidity the NBH launched on a daily basis from July 8 to improve monetary policy transmission have been effective, pointing to a “significant” increase in FX swap yields.

Commenting on June inflation – which reached 11.7% year-on-year – Virág said repricing during the month was “a multiple” of normal levels and noted the impact on headline CPI of food prices.

He added that the recent government decision to charge households a market price for above average energy consumption would lift the path of inflation until the measure falls out of the base in a year.

He estimated second-quarter GDP growth reached 6.0%, but pointed to a “clear slowdown” from June, while noting rising risks of recession in the global economy.

Virág said achieving the inflation target is the central bank’s “priority”, adding that anchoring inflation expectations is of “key importance”.

In the current environment, coordinating fiscal and monetary policy is “especially important”, he said, adding that improvement in the fiscal and current-account balances strengthens the effectiveness of monetary policy.