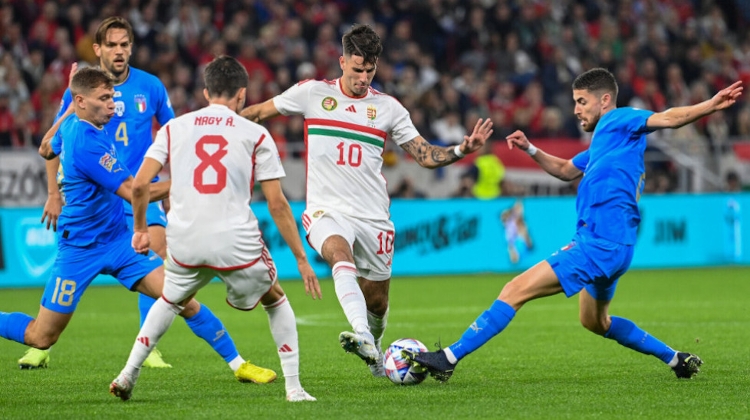 Marco Rossi's side finish behind tonight's victors in Group C of Nations League Division 1 after a superb goalkeeping performance from Gianluigi Donnarumma inspired visitors Italy to a 2-0 victory in Budapest tonight and therefore qualification as group winners for the final four next summer.

Before this last round of the Nations League group stage, Hungary were top with ten points from five matches with second-placed Italy on eight points, so the visitors needed to win here in Budapest to reach the final four of the tournament, while even a draw would have been enough for the hosts to win the group.

Hungary lost 2-1 to Italy in Cesena in June, but since then had won away against England and Germany, so they entered this game in the Puskás Arena full of confidence.

Hungary head coach Marco Rossi made only one change from Friday's victorious lineup against Germany, Loic Nego replacing Dániel Gazdag in the attacking trio alongside Ádám Szalai and Dominik Szoboszlai, while behind them András Schäfer and Ádám Nagy lined up in the middle, Attila Fiola and Milos Kerkez played on the two wings, Ádám Lang, Willi Orbán and Attila Szalai comprised the defensive three and Péter Gulácsi in goal.

The match's first opportunity came the home team's way, Dominik Szoboszlai lining up a free kick from 22 metres in just the second minute, but his shot bounced off the wall. Italy then wasted several opportunities in a short time, Attila Szalai clearing the ball from under his own crossbar in the fifth minute.

Much of the first half was dominated by the away side and they took a 27th-minute lead when Giacomo Raspadori took advantage of Ádám Nagy's loose pass and scored from close range.

Federico Dimarco almost doubled Italy's lead five minutes later, only for his rasping shot to fly just wide of Gulácsi's left post,and then it was Hungary's turn to threaten, Szoboslai first seeing Orbán unable to convert his cross from a free-kick before the RB Leipzig playmaker tested Donnarumma himself with a shot that was well saved.

Both teams made a change at the half-time break, Callum Styles replacing Ádám Nagy in Hungary's midfield and it very nearly paid early dividends when, in the 50th minute, Nego, Szoboszlai, Styles and Ádám Szalai all shot at goal from various distances, but Donnarumma and his defenders somehow combined to deny the hosts.

Rossi's side would rue that profligacy just two minutes later when Dimarco finished off a slick move to hand his country a two-goal cushion.

Another two minutes later and Donnarumma again came to the fore to briiantly repel Styles' close-range header and the same player was denied in the 63rd minute when his shot deflected off an Italian defender, but Donnarumma produced yet another save. Hungary were clearly on top in this period of the game, regaining possession high up and keeping the opponent's goal under pressure.

In the 75th minute, Ádám Szalai, making his final appearance in international football, was replaced by Ádám Martin but more fresh legs failed to break down a stoic and experienced Italy defence.

Italy therefore prevailed 2-0 and win the group by a single point, so they will progress to next summer's Nations League semi-finals. Hungary finish in second place with 10 points, ahead of both the German and English national teams.

The year isn't over yet though and Marco Rossi's team still have two more fixtures in 2022, both in November when they'll play away to Luxembourg and then at home to Greece.