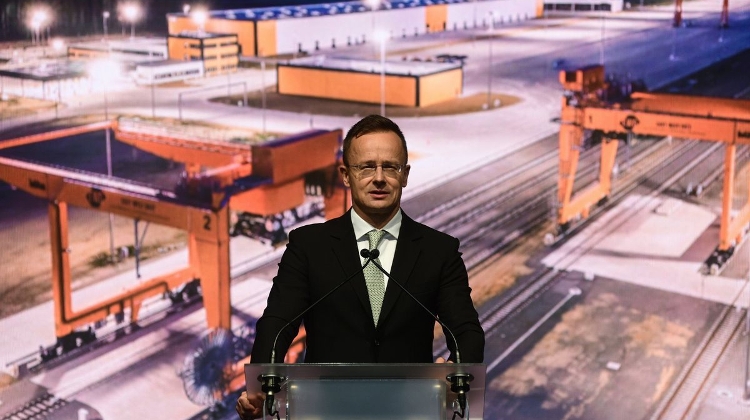 Addressing the ceremony, Szijjártó said the terminal will play an “enormous role” in facilitating exports of Ukrainian grain to trade routes on the Adriatic.

The terminal’s transshipment capacity will reach about 800 tonnes of grain per hour, while annual capacity is set to reach 1 million containers, he said.

He noted that the largest and most modern railway intermodal combi terminal in Europe had been completed in record time and using digital solutions. It will allow fast and safe loading of four 740 metre long trains at the same time, he added.

About 500 people will work at the East-West Gate terminal, Szijjártó said.

According to the press material distributed at the event, the East-West Gate terminal (EWG) will be Europe’s first intermodal combi terminal based on green technology using its own 5G network for internal communication and operation of its technological devices.

The facility will be powered by green technology, in line with the EU’s rail and climate strategy.

A high-performance solar park as well as a heat pump system will provide power and only electric terminal tractors and e-cars will be used in the terminal area.