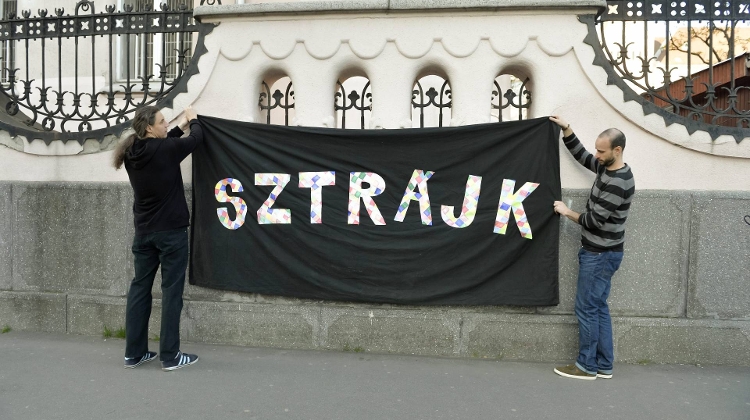 Around 100 teachers, students, and parents gathered in front of Ferenc Kölcsey High School on Monday to deliver a statement by the school’s teachers and a parent-initiated petition to the Ministry of the Interior.

Both the petition and the teachers’ statement demand immediate reinstatement of the teachers fired from the school on Friday.

The demonstrators marched to the ministry in an orderly manner, staying on the sidewalk and not obstructing traffic.

Several opposition politicians also took part in the event, such as MPs Antal Csárdi from LMP, and Bence Tordai and András Jámbor from Párbeszéd.

The group arrived at the Ministry of the Interior at 4:00pm, where the statement signed by 43 teachers from Kölcsey High School was read. The teachers wrote that they could not accept the firing of their colleagues, as it resembled something that would happen in a police state.

Following that, the parents also read out their letter addressed to Interior Minister Sándor Pintér, Minister of the Interior, which Telex reported had received more than 6,000 signatures.

In it, they wrote about the school’s teachers:

To us they are first and foremost teachers and people, and it can only be said to their credit that they raised their voices and lent their support not primarily for themselves, and not for their own monthly salary, but for basic rights, their profession, our children, and, for the long term, for the future of education.

The protestors attempted to deliver their petition and statement to Minister Pintér, but were unsuccessful in this. Eventually two teachers were allowed to enter the building and hand over their concerns to ministry staff.