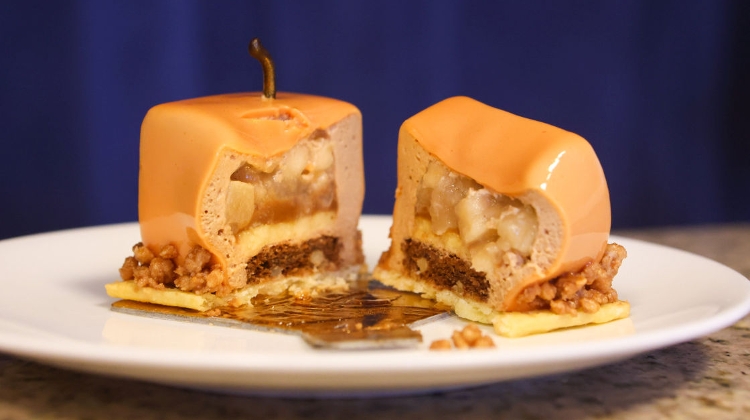 Veranda Confectionary's ‘golden apple’ cake has been named the Dessert of Budapest of 2022. The gianduja-apple confection, placed on a linen sheet, was tasted for the first time at the recent 'Sweet Days Budapest' chocolate and sweets festival.

Hungarian chocolate production has been among the world leaders over the last decade, as confirmed by numerous international awards, said Csaba Rebrus, president of the Hungarian Chocolate and Confectionery Association (Csésze, which translates as ‘Cup’), the main organizer of the Sweet Days.

However, he added, Hungarian confectioners and confectionery manufacturers have suffered huge losses as a result of the coronavirus epidemic, and now, the steep rise in the price of raw materials is a serious problem for them. This is partly why the main aim of the Sweet Days is to raise awareness of these artisanal workshops, he said.

An important aspect of the competition is that the sweets must be made from ingredients that are available to anyone, all year round. The two most important ingredients are always determined by the previous winner: this year it was apples and hazelnuts. The judging was anonymous, and the judges only knew the winner after the scores had been tallied.

Edina Farkas, of Veranda Confectionery in Budapest, said that the Golden Apple of Budapest was a mousse cube placed on a linzer base. It is partially covered with hazelnuts rolled in gianduja milk chocolate on the outside. Inside, there is an apple filling with lemon curd and orange-coffee cream, surrounded by gianduja milk chocolate mousse.

Published by the Budapest Week group, D&T magazine covers economic, diplomatic and current affairs. Popular in the local diplomatic community, as well as in business and hospitality circles.