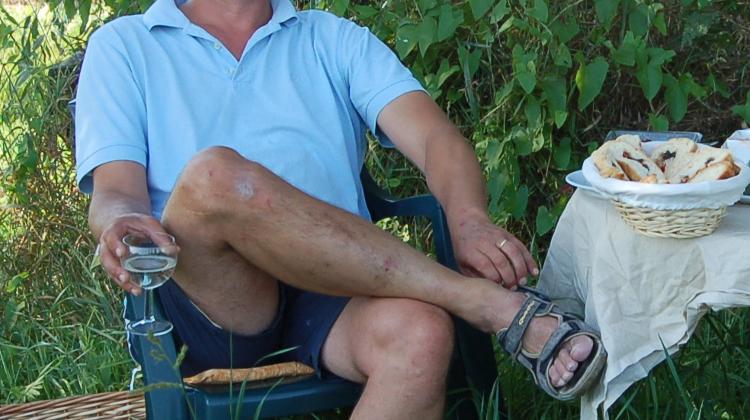 I was born in 1968 in Groningen in the North of The Netherlands. I'm married to my lovely wife Trudy

I studied Tax Law at the Ersamus University in Rotterdam and graduated as a Dr. of Law. Afterwards I worked for Cap Gemini Ernst & Young until 1999 and then became a freelance ICT consultant and QA manager mainly for banks and insurance companies like ABN Amro, ING etc. I do this for our company QA Team.

At the moment I divide my time between The Netherlands where I work on contract assignments and Hungary where we're building our Hotel and B&B the Porva Inn.

In my spare time, of which I don't have very much, I like reading, cooking and sailing.

1. When did you arrive in Hungary and what brought you here?
We arrived here in august 2007 and are living here permanently since january 2008. We wanted to start a panzio/hotel with a focus on good (local) food, good rooms, quietness and intelectual guests,
a place to enjoy and relax. And we wanted to live in the countryside. with a good climate and not to many people, but close to a bigger city like Budapest and Vienna.

2. Have you ever been an expatriate elsewhere?
No

3. What surprised you most about Hungary?
That's a good question. I haven't really thought about it.
On the upside, the relaxedness, the hospitability and the overall friendlyness of most Hungarians. The beauty of nature in the part where we live
On the downside the enormous bureaucracy, I thought Holland was bad, but the Hungarian government realy took bureaucracy to the next level.
And the car driving of Hungarians. The Hungarians probably where such good fighters because the dont't get the concept of risk, judging from the way they drive

4. Friends are in Budapest for a weekend - what must they absolutely see and do?
Tell me, I don't live in Budapest but am certainly interested to know.

5. What is your favourite Hungarian food?
Bableves, made by Atilla Nemet and air dried Mangalica ham from Lovas pincer (together with their excellent wine off course)

7. What is your favourite Hungarian word?
When a Hungarian doesn't know something they say something like Oohah.

8. What do you miss the most from home?
Apart from friends and family (altough they come over a lot), special shops and places to enjoy, but that probably wouldn't be true if we lived in Budapest. And I miss the sea, we used to live 500 metres from the beach

9. What career other than yours would you love to pursue?
We changed our career two years ago in what we're doing now. I don't think there will be other career changes in the foreseeable future.

11. Where did you spend your last vacation?
Italy

12. Where do you hope to spend your next one?
Travel from Alaska to Pategonia in 4 months

13. What was your favourite band, film, or hobby as a teen?
Robocop

14. What can't you resist?
The beautiful Hungarian women, but alas, I'm already married

16. Book or movie?
Book, Slaughterhouse 5 by Kurt Vonnegut and in second place A gyerták csonkig égnek by Sandor Marai. I recently read the Dutch translation. What a great book.

18. Which social issue do you feel most strongly about?
In Hungary, the lack of solidarity between people. The "everyone for himsself" attitude. To name one example, the corruption in politics and business. Altough some people get rich from it, it demotivates foreign investor to invest in Hungary. Wich is devastating for the employment rate

19. Buda side or Pest side?
Buda side, not only because pest is the Dutch word for plaque.

20. What would you say is your personal motto?
Everything will be allright (Alles sal reg kom)