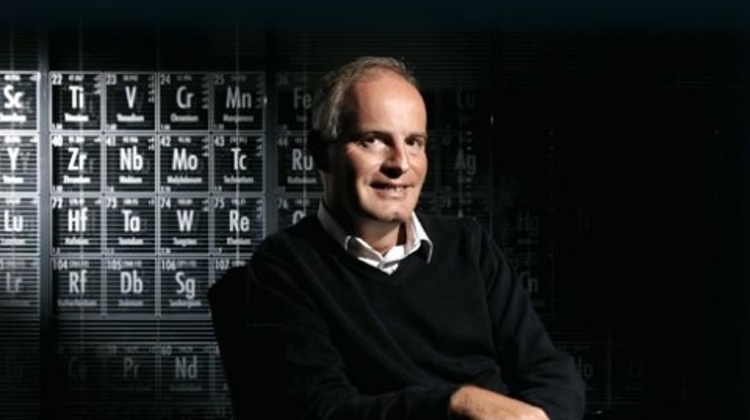 Alex describes himself as someone who "works with scientific entrepreneurs to nurture and grow their business, put them on the map in their chosen area and create value".

He recently took up the mantle of CEO of ComInnex, a young Hungarian company involved in pharmaceutical research services and holds board and advisory positions in a number of other Hungarian and UK start-up companies.

For the last 8 years he was CEO at ChemAxon, a specialist Hungarian software company also involed in pharmaceutical research and prior to that CEO of ThalesNano and CFO of ComGenex. His earlier career was in international banking, with NatWest in London and then with ABN AMRO in London which later brought him to Budapest.

Alex is Dutch, was born in Holland, lived most of his life in the UK until moving to Hungary in 1997 - thus he has joined the EU three times! In his spare time he enjoys cycling and sailing.

1. When did you arrive in Hungary and what brought you here?
I arrived on 2nd Feb 1997. ABN AMRO Bank had just bought the Magyar Hitel Bank and I came over as one of the ex-patriate crew to work alongside the local management.

I stayed with the bank for 3 years and then, when my contract expired, there were difficulties placing me due to reorganizations and other issues. I started to look for alternatives and was lucky to find a job as finance director at a Hungarian chemistry services company in the pharmaceutical discovery sector. That was in late 2000 and I've been working in that sector and with local companies ever since, helping them to grow their businesses in international markets.

2. Have you ever been an expatriate elsewhere?
As an adult, no. However I grew up in an expatriate family since my father worked for Shell. He was posted to London when I was 11 months old and I've never moved back to Holland since.

We did a three year stint in Indonesia in the early 70s where we enjoyed holidays on tropical islands and exotica like having our own gibbon that we used to let run around the house. My parents are back in Holland (already for many years) and my siblings are in the UK.

3. What surprised you most about Hungary?
In Holland terraces are open all year round. I was very surprised after my first 2 months when Spring came and by late March it was warm, yet all the terraces remained shut, since the rules dictated that they only be open from April 15th. That was really weird for me, though it's changed now and Budapest is a great place for sitting outside with a coffee or a beer.

I was also delightfully surprised by the wines (aren't we all?).

As far as the people, I was surprised how few spoke English - though that has changed too - however I have to say that everyone was (and still is) extremely helpful. You just have to smile to prompt a friendly response.

4. Friends are in Budapest for a weekend - what must they absolutely see and do?
When I first arrived I had a little Suzuki on loan from the company and in the evening I used to drive up and down the rakpart, I found the Danube fascinating and the views at dusk magnificent. I still do. I always take guests on a walking tour from the area of the Opera, to the Basilica, down to the river at the Four Seasons (have a beer in the lobby just to feel extravagant) and then over the Chain Bridge, up the funicular and across to the Fisherman's Bastion for the view.

For something completely different take the Dunarama river taxi (it's a powerboat) up to Szentendre, have lunch and then back again. You'll feel like a Hollywood star powering over the Danube.

5. What is your favourite Hungarian food?
Fogasfilé at the halászkert in Pákózd. Simple but delicious. I replace the fries with a salad.

6. What is never missing from your refrigerator?
Cheese - I guess that is the Dutch roots.

7. What is your favourite Hungarian word?
Krapek - something like dude.

8. What do you miss the most from home?
Decent pubs or restaurants in the countryside. Especially noticeable if you're out for a bike ride or something and want a drink or a spot of lunch.

9. What career other than yours would you love to pursue?
I work in the field of drug discovery and I admire the passion of the scientists who are trying to find new medicines. Wouldn't it be great to actually be part of a team that discovers a cure for an illness!

10. What's a job you would definitely never want?
A lawyer. Who wants to be at the butt end of so many unkind jokes :-)

11. Where did you spend your last vacation?
We went to Mallorca for 10 days. It was fantastic. I hadn't known much about the island before we arrived and was very pleasantly surprised by everything! Beautiful scenery, nice beaches, plenty for kids and adults.

12. Where do you hope to spend your next one?
No plans yet ... We'll spend some time at the Velence Lake for sure and then likely jump in the car and head for Slovenia, northern Italy or Croatia for a week. Another huge benefit of Hungary's location is that sunny beeches are only a car journey away. I think we've been to Croatia 7 times, always to different places.

13. What was your favourite band, film, or hobby as a teen?
That was the time of punk so I was into The Clash, The Stranglers, Sex Pistols, Blondie and the likes. Seeing Blondie here in Budapest last year was absolutely great!

Sailing was a big passion at the time. We had a boat down on the Solent in a cute little harbour village called Bosham (the sort of quaint place you also can't really find much in Hungary) so in the summer we'd be down there every weekend. We do have a sailing dinghy at Velence Lake, which is used mostly for swimming from, these days cycling has taken over from sailing though that is also transportation, not just recreation!

14. Apart of temptation what can't you resist?
A bicycle ride any time and a cold beer in the garden on a hot summer's day after work.

17. Morning person or night person?
Definitely morning. I'm usually first one up in our house.

18. Which social issue do you feel most strongly about?
I'm not sure if it is a social issue as such, but corruption. So completely unnecessary, greedy and directly or indirectly damaging to society.

20. What would you say is your personal motto?
It's not a perfect life, but it is a very good one!