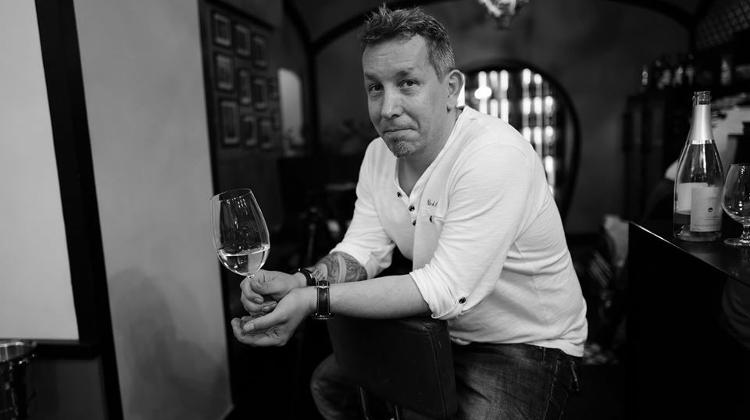 I was born in Budapest in 1977 and now I am married and have a child.

I studied catering in high school, even though I had dreamt of becoming a photographer since visual arts have always been important to me. This might explain why, while I prepare a dish, I always think in terms of colours and vision. I aspire to show the beauty of food to my guests.

I studied cooking watching my mother and I still often get inspired by family recipes.

At the beginning of my career, I worked as simple chef, but in the autumn of 2006, I was hired by the Alabardos restaurant. This is where I became familiar with fine dining. At the time, catering in Hungary was experiencing a new approach. I learnt new techniques and came across new ingredients. All these changes had a great effect on me: the world had become wider for me. After spending a few weeks in Vila Joya in Portugal (a restaurant with two Michelin stars), I realised that Hungary needed a similar type of catering.

In 2010, Tamás Horvath and Zoltan Kalocsai gave me the opportunity to head the kitchen of their new restaurant, Wine Kitchen. I threw myself into my first head chef job with fear and excitement. Since the opening, I have learnt and changed much. I have gained experience in leading a kitchen, inspiring a team and renewing continuously.

What is the philosophy of my kitchen? I would like to lead a kitchen with lots of flavours. However, if I had to define just one style, I would say "free". I get inspired by the gastronomy of Transylvania, but I also use ingredients from countries such as Spain, France or Italy. I would like to show the varied faces of Hungarian cooking using modern technologies.

1. Where did you grow up?
Budapest, District X, Kőbánya. After elementary school came a slight detour to Újlengyel as my family moved there in my high school years. Three years later, having finished high school, I moved back to Budapest.

2. Who was the best cook in your family?
My mother. She brought me closer to cooking. My grandmother, who now lives in Australia, also cooked well.

3. What is your fondest food memory?
I have a ‘crazy’ breakfast dish since my childhood ‒ tejbepapi‒ which is chopped toasted brioche in warm milk.

4. What was the first recipe you learned?
Scrambled eggs, which I want to point out, was the basis for all generic chef work: stir, shuffle, add ingredients…

5. What is your favourite food to eat?
Stuffed peppers, classically prepared. Not even paprika is necessary. Meat balls are enough. And tomato sauce with white bread.

6. How often do you 'play with food' to create new dishes?
I constantly do. This is not work, it’s playing.

7. Which chef do you admire most and why?
I would like to mention two defining names: Ferenc Nagy –my first boss ‒ taught me perfectionism and how to treat people. He also taught me how to organize, but I only realized this years later. He was the one who chased me across the kitchen with a spoon to taste something. ‘No’ did not exist for him. The other is Attila Bicsár, who is the chef of Alabárdos. That is where I started and I met him there. He represents high-end gastronomy.

8. When did you start cooking, and why?
Partly because of my family, during childhood. I have a sister who is six years older, so when she was a teenager I helped out in the kitchen. I wanted to become a photographer but did not manage to find a practical place, so my second choice, becoming a chef, won out.

9. What was your funniest kitchen incident?
When Ferenc Nagy chased me in the kitchen to try a dish that I disliked. I have always worked in a friendly, family-like kitchen atmosphere. There was a time when we poured water on the girls from a bucket at Easter, and they replied with hoses.

10. What was the luckiest moment in your life so far?
When I got to work at the Alabárdos restaurant for 4.5 years … accidentally. I was working for a manufactory kitchen which I got bored of, and I sent out my CV to various restaurants. My CV made it from Péter Ambrus from the hotel, to the owner.

11. How do you like to relax?
Sports, friends, family. My daughter is 8 years old. I try to spend a lot of time with her, whenever I can. And quiet,especially after a 16-hour shift.

12. What is your most treasured possession?
I have a flat and a car. Other than those I cannot think of anything.

13. Apart from temptation, what can't you resist?
Stuffed peppers and smoking. I can’t say no to my daughter either.

14. What single thing would improve your quality of life?
A difficult question, because I always have goals. More time would help a lot, but I don’t dream of luxury things. A muscular body without investment would be great.

15. What career other than yours would you love to pursue?
Photography, because the world attracts me. Or painting or any genre of dancing.

16. What job would you definitely never want?
I could never sit in an office. I would fall asleep on top of the keyboard.

17. What achievement in your life are you most pleased with?
Obviously the star. It came with great stress and was then followed by expectations and lots of pressure.

18. What behaviours do you most like in others?
I like honest people, even if that honesty can hurt. Cooperative and tolerant behaviour is very attractive to me.

19. What would you say is your personal motto?
I don’t use a motto.

20. What is your professional goal for the next 5 years?
I have plans. Remaining at the same level and achieving new results. I want to continue working actively for about 5-6 years, but then leave this tense, fast-paced work. I would do something kitchen related. I can imagine working in a small guesthouse somewhere.

21. Is there anything else you would like to mention?
Yes, family. I have been married for 15 years, and we have been together for 18 years. My daughter is 8 years old and wants to be a chef, but she won’t be, even though she doesn’t know it yet. I wouldn’t want to be a catering wife.

Translated by Daniel Csaki for XpatLoop.com