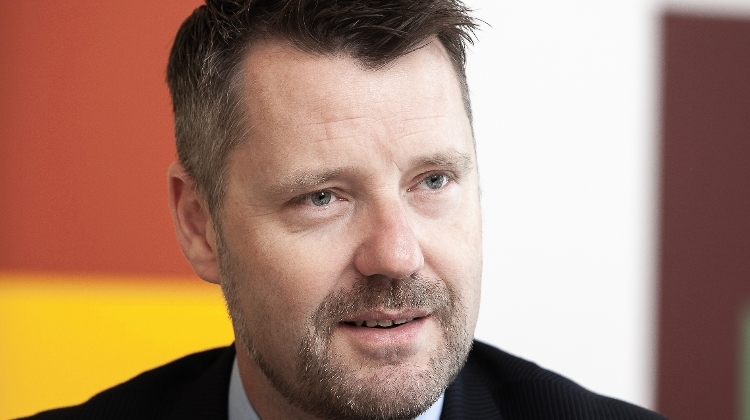 Andrew studied at the Budapest University of Economics and graduated in politics at the University of London’s School of Slavonic and East European Studies.

He moved to Hungary in 1994 where he worked in the regional headquarters of Xerox in Budapest, first as a sales representative and later as marketing and regional sales manager.

Thereafter, he continued his career as the managing director and head of retail of the internet division of Hungarian Telekom (Axelero) and then was appointed as the regional sales director of Cisco Systems. He joined the Wallis Group in 2005.


1. What’s been happening at work and at home since your first Xpat Interview?
Wallis Automotive Europe has grown its annual turnover by more than 10x since we last chatted.  Back then we were the importer for Japanese and South Korean car manufacturers covering three countries in CEE.

We now operate in 12 regional markets and besides representing Jaguar and Land Rover in many of them, we will take over Opel’s business in Hungary, Slovenia, Croatia and Bosnia Herzegovina next month.  It’s a huge privilege to partner with such iconic global brands.  The industry is changing fast with new regulatory and technological winds blowing.  In the short term the story is one of industry consolidation (mergers and alliances) and lower emissions (hybrids, electric vehicles).

Moving forward we can expect a cautious advance towards new ownership models such as car-sharing, autonomous driving and the arrival of new, disruptive players on the market, maybe some of them from China.

Our parent company AutoWallis is a relatively new entrant to the Budapest stock exchange where it is hoped we can achieve our goal of being at the forefront of these changes and present throughout the automotive value chain.

2. On a scale of 1 to 10 how happy are you with life in Hungary, and why?
It was a good decision to settle here, life’s been kind.  At least a nine.

3. What’s the best party you’ve ever attended, and why?
I went to Rio de Janeiro last year and life there is one big party.   It was amazing to join one of the enormous samba parties where 80 year old grandparents were shaking their hips on the dancefloor alongside teenage revellers. It’s such a cheerful, carefree society.

4. What’s your favourite drink?
I’m a caffeine junkie - diet Coke and strong coffee.  I also like good wine and thankfully Hungary is pretty blessed in this respect.

5. What hidden talents do you have?
I’m a passable pianist in my private life, which can help to enliven any house party.

6. What was the most interesting travel trip you have ever taken?
I am fortunate to travel a lot for business and pleasure.  In today’s connected world its remarkably easy to find travel tips and navigate unfamiliar places, but there’s no substitute for local knowledge.  I had an amazing time in Mexico a few years ago where a friend hosted and took me on an adventure down the country’s Pacific coast. The scenery was mind-blowing.

7. If you were given a wish that could come true, what would you ask for?
The ability to put the brakes on climate change.  Is there any issue more pressing in the world today?

8. What’s the last book you read, and movie you watched?
I’ve just finished the first volume of Clive James’ autobiography and enthusiastically ordered the next three.  I love his warmth and deadpan wit.  He passed away last year, but left a rich literary legacy.

I watched the Borat sequel a few days ago and although there are still a few good gags, like most sequels it generally disappoints. However, one of the best things I have seen recently is The Spy, a series not a movie, but also starring Sacha Baron Cohen.  It’s a real nail biter.

9. If someone wrote a biography about you, what would the title be?
“Scraping the Barrel” 😊 There are lots more compelling people and topics to write about!

10. What is the perfect pizza toppings combination for you?
Who’s paying?  I’ll take king prawns, lobster and enormous scallops!

11. If you could trade places with any other person for a week, real or fictional, with whom would it be?
It would be fascinating to change places with Elizabeth II, the world’s longest serving head of state.  Some of what she does is quite is dull, but having seen off a dozen British prime ministers and nearly as many US presidents she must know some pretty big secrets.

13. What’s the best website you’ve ever visited, and why?
I don’t have any particular favourite.  I spend a lot of time on news and politics websites and although I have firm opinions of my own, I like to read a plurality of views, even some of the whackier ones.

14. Who do you admire the most, and why?
My mum had a serious stroke 4 years ago which deprived her of her speech and movement.  She has lived in a nursing home since then and in spite of the dramatic change in her quality of life – exacerbated by strict covid restrictions which means she hasn’t been allowed a visitor in over half a year – she still laughs and smiles when we speak to her on Skype.

15. What do you like best and least about living in Hungary?
I love the capital, Budapest. It is a buzzing and breathtakingly beautiful city.  Having a teenage child in state schooling the thing that irritates me most is the Hungarian education system.  It’s tedious and often completely irrelevant to the modern world.

16. What has made the biggest impact on your life so far, and why?
Being born to loving parents who invested time and energy in their children.  They gave us everything that money can’t buy.

17. If you won USD 30 million, what would you do with the money?
I’d briefly flirt with ideas of private islands and yachts, before deciding to invest for a rainy day. I’m quite frugal. And of course there are people with far more pressing needs than mine, so I would probably get more of a kick from supporting good causes than a champagne lifestyle.

18. If your life had a theme song, what would it be?
The theme from Juliet Bravo. It was filmed where I grew up.  Google it!

19. If you could live anywhere in the world, where would you choose?
I’m pretty settled in Hungary, but maybe one day when I’m older and creakier it would be nice to have somewhere to escape the winters.

20. In ten years from now what will you be doing?
Pretty much the same as now.  There’s still plenty of steam left in the job I am doing and I hope Wallis Automotive Europe can grow and prosper as much as it has done in the last decade.