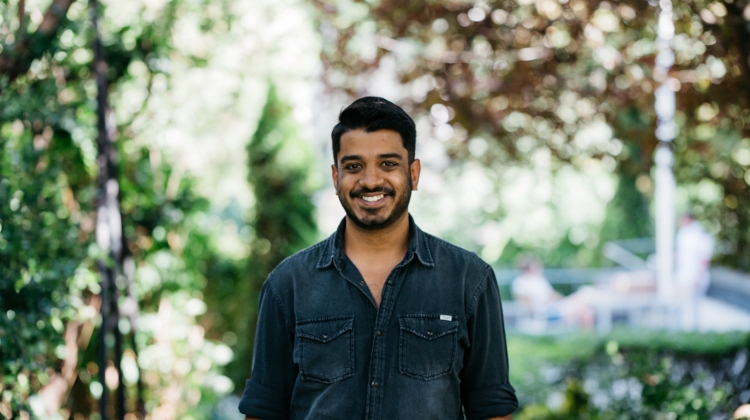 Sid Moorthy is an Indian national, living in Budapest as a marketer and comedian. He has lived in India, the Czech Republic and Scotland, in addition to Hungary, which he considers his home.

I arrived in Hungary on November 1st, 2000. A car brought me here. I came here with my family, because my dad had been transferred to the Budapest office of a big advertising agency to be their Deputy Managing Director.

Before we moved to Budapest, my family lived in Prague for 2.5 years. Prague at the end of the 90s, while a beautiful city, was not overly inviting to people with my family's level of melanin, so I was pretty happy about getting to leave. I've been back there a few times over the years and it's changed a lot, for the better. I also lived in Aberdeen, Scotland for 5 years while I was a university student. Apparently I'm addicted to living in countries where black pepper is considered spicy.

Honestly, it was the food. I love Hungarian food. Being an Indian, I'm used to my food having flavour. Let's just say that my school lunches in Prague of boiled chicken, dumplings and plum jam weren't exactly knocking my socks off. Hungarian food's amazing. Very simple, very humble, and packed with flavour. Except káposzta in any form. That belongs in the trash.

See me or any of the local amazing stand-up comedians perform. Check out this link for all upcoming events. They're in English, and are normally free of charge.

Snack- sajtos pogi
Main- Chicken pörkölt with nokedli and savanyúság
Dessert- Where to begin? Hungary's desserts are a culinary sleeping giant and I can't wait for the world to find out.

Unused vegetables that I've bought at Spar thinking that I'm going to start being healthy. Also home-made yoghurt because despite not having lived there since 1998, I'm still Indian.

"Tökéletes," meaning "perfect." But it literally translates to "pumpkin-lifey." It's so Hungarian. Imagine being so depressed that you're actually jealous of how amazing a pumpkin's life is.

I actually consider Budapest and Hungary my home. But if we're calling India my home, I'd say it's the fruits. When I'm in India, my standard, cheap, and easy to get breakfast consists of two Alphonso mangoes and a cup of strong, South Indian filter coffee. It's pretty hard to beat. Also my parents, I guess, but I can Skype with them. You can't Skype mangoes, much to my dismay.

My main job is in marketing, but I'm sort of pursuing my passion anyway, which is entertainment. I do stand-up comedy regularly, which I'd like to do professionally, and I'm also a general host/speaker at various events. Most recently, I was a host/moderator at Brain Bar 2020 and 2021.

Barcelona- my sister lives there. I hadn't seen her since before the pandemic and we're really close, so it was good to see her and demand that she make me endless cups of tea.

Probably Amsterdam. Lőrinc Réti, the former co-host of my comedy show, Magic Mic Comedy, lives there now, and I'd like to check out the comedy scene there and have him make me endless cups of tea. Follow him on Instagram @lorinc_jokes.

The opportunity to make a silly comment. Hats off to my boss and girlfriend, seriously.

Band- Guns N' Roses
Film- The Godfather
Hobby- Playing guitar.
Apparently I haven't changed since I was a teenager, or I prematurely had exquisite taste. Yeah, let's go with that.

Red, all the way. I don't like white wine because I don't want to punish my taste buds even more than they already have been by Czech school lunches.

Depends on the book or the movie. James Bond? Movie. Look up the title of Chapter 5 of Ian Fleming's "Live And Let Die" book if you need more context. I'm an avid reader, but I'm also a cinephile. Whatever it is, it needs to be awesome.

I hate mornings. My dumb cat keeps waking me up because apparently the fact that I have toes is personally offensive to her. Also, stand-up usually happens at night, so let's go with night.

Child abuse and physical violence of any sort.

Choose to do things the fun, silly, light way whenever possible. No one's ever been on their deathbed thinking, 'I wish I worried more.'