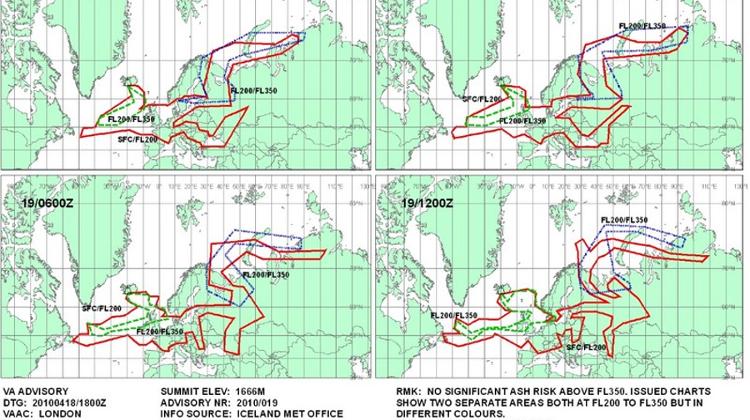 "Hungarian airspace remains closed from all traffic until Monday noon local time, the National Transport Authority’s Civil Aviation Directorate announced. This means that all flights are cancelled in Hungary and Budapest Airport has no incoming our outbound flights at all. The airspace closure, implemented all over Europe due to a volcanic eruption in Iceland sending dangerous ash clouds into the air, is causing revenue losses of EUR 200 million per day, according to conservative estimates.

Volcanic ash, flowing in the air between 18.000 and 35.000 feet, at altitudes used by most airliners, may seriously harm jet engines thus air traffic was halted over almost all Europe.

Economists say the economic impacts of the plume and the subsequent suspension of air traffic have not been so large that would prompt a review of growth estimates on European economies. They pointed out, however, that if airspace is not opened for a more extended period, i.e. months, negative economic implications would be inevitable, as vacations would be postponed, shipments would be late and fuel consumption would drop.

European air traffic control organisation Eurocontrol said in its late Sunday update that about 5,000 flights took place yesterday in European airspace, while on a normal Sunday, it would expect 24,000.

At the current time, air traffic control services are not being provided to civil aircraft in the major part of European airspace. This includes Belgium, parts of Croatia, the Czech Republic, Denmark, Estonia, Finland, parts of France, most of Germany, Hungary, Ireland, northern Italy, the Netherlands, parts of Norway, Poland, Romania, Serbia, Slovenia, Slovakia, Sweden, Switzerland, Ukraine and the UK.

In some of these areas the upper airspace has been made available, depending on the observed and forecasted area of possible ash contamination. However, it is difficult to access this airspace as in most cases the surrounding area is not available for flights, Eurocontrol said.

Southern Europe, including Spain, Portugal, the southern Balkan area, southern Italy, Bulgaria, Greece and Turkey are open and flights are taking place in these areas.

The latest updated map of observed and forecasted area of possible ash contamination indicates some positive evolution in the coming hours.

Currently, IATA’s "initial and conservative estimate" of the financial impact on airlines is in excess of USD 200 million per day in lost revenues. In addition to lost revenues, airlines will incur added costs for re-routing of aircraft, care for stranded passengers and stranded aircraft at various ports, the association said on Friday.

IATA has set up its crisis center in Montreal and is closely coordinating with Eurocontrol and European air navigation service providers.

The stock price of Air France-KLM was down 8% after market opening today, British Airways dipped 6%, Ryanair dropped 3% and easyJet shed 3.7%.