U.S. Embassy Makes A Splash At Sziget Festival In Budapest 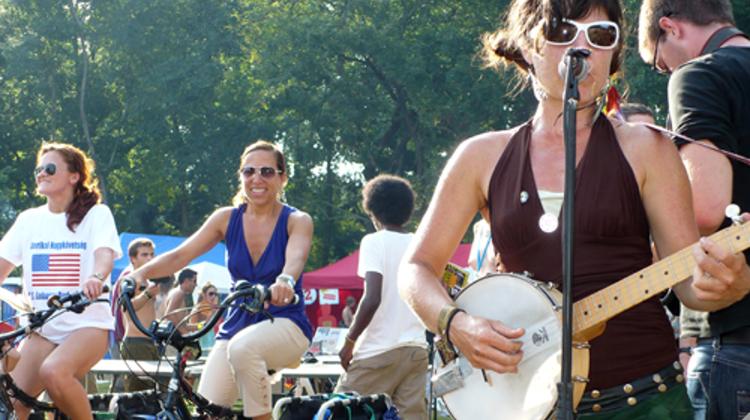 "For the third year in a row, the U.S. Embassy organized a tent at Sziget, the premier music festival in Central Europe, where hundreds of young people stopped by to learn more about the United States and opportunities to study there. As a theme of the festival this year was social inclusion and fighting poverty, the Embassy also organized various activities promoting tolerance during the five-day festival that took place August 11-15.

Ambassador Eleni Tsakopoulos Kounalakis visited the festival several times and spoke with many visitors and the press. She also participated in the playing of Roma music performed on traditional instruments, and attended a jazz concert by the world-renowned Hungarian jazz singer Veronica Harcsa on the Jazz Stage which was co-sponsored by the Embassy.

As the highlight of the U.S. Embassy program, Ambassador Kounalakis participated in a performance by the environmentally-conscious band, the Pleasant Revolution. This group from California is unique in that the electricity for all their instruments and their sound system is provided by bicycle-powered generators. They also travel between their concerts in different cities by bicycle.

The Ambassador told the audience the band’s methods are great examples of American ingenuity and "smart power" and are very much in line with the Obama Administration’s policies on the environment."

Photo: Ambassador Kounalakis pedals to generate electricity for the performance of the Pleasant Revolution Band at Sziget. (Embassy photo)