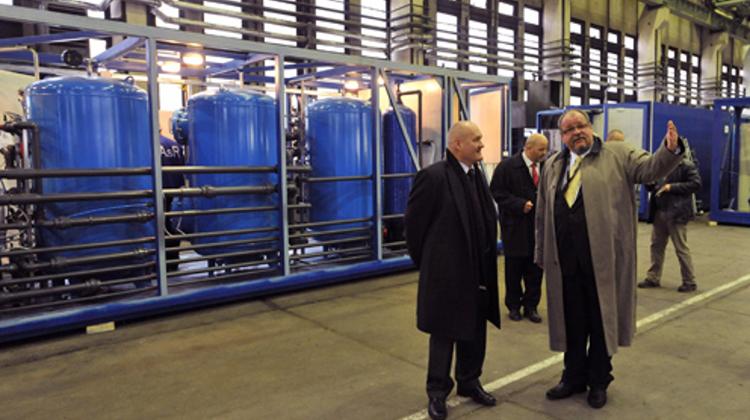 Zoltán Borbíró said that in the last two years the MoD companies had set themselves the goal of developing new equipment. During this time, among other things, they have constructed a water purification kit which is capable of significantly reducing the arsenic level of drinking water as well.

Water purification is a “military capability” because e. g. in the area of operations it is important that drinking water be available to the troops. The arsenic removal device was also needed because the arsenic level of drinking water in Hungary generally exceeds the standards set by the European Union. This issue primarily affects the region of the Great Hungarian Plain and Zala County, he added.

He pointed out that the container-shaped machine can be fielded and customized anywhere easily and quickly. It is capable of filtering out both organic and inorganic materials, and – based on the entirely new patent – it can absorb arsenic as well. For experimental purposes, one such machine was installed on the water base at Érmellék, Békés County, and after a four-month trial run, the average arsenic level of 120 micrograms/liter was reduced to two micrograms, Zoltán Borbíró said to illustrate the effectiveness of the machine, adding that this level is much lower than the EU limit value. Three companies participated in the development of the machine, namely the ED Co., the Currus Co. and the Hidrofilt Ltd.

Speaking about the new developments, the Deputy State Secretary mentioned the unmanned aerial vehicles (UAVs) of the Hungarian Defence Forces, which will soon be produced in three types. Beyond the tasks of military reconnaissance, they are suitable for civil use, disaster management and border guarding as well. The UAV types include a hand-launched variant which may reach an altitude of 5,000 meters.

Furthermore, they can be fitted with various types of (night vision) cameras. Depending on the configuration, the price of the Hungarian-developed UAVs is about half that of the similar foreign aircraft, he added. These UAVs are priced so reasonably because the MoD company has developed them by using exclusively Hungarian products and workforce, and every component has been designed by their own experts, the State Secretary said.

In connection with the further developments, he referred to the so-called dual-use midibus, which is to be manufactured in cooperation with Volvo, but the Rába Automotive Holding Plc. may also play a substantial part in its development. The buses will be designed to run even under extreme circumstances, so their primary field of application is disaster management. He also told us that a special vehicle superstructure has already been constructed which makes the EOD technicians’ work easier. For the time being, the State Secretary declined to reveal any further details of this project, but he noted that the water purification equipment and the new vehicle superstructure would be introduced to the public on Monday.

The companies owned by the Ministry – which nowadays operate in an integrated way – are responsible for the various developments of the Hungarian Defence Forces, and their profile also includes the modernization of Soviet technology. By way of example, the Deputy State Secretary mentioned the digitalization of the old analogue radars, which can reduce their energy consumption among other things. Around 60-70 per cent of the countries of the world used Soviet military equipment in the past, and they still have a significant number of such assets, the State Secretary added.