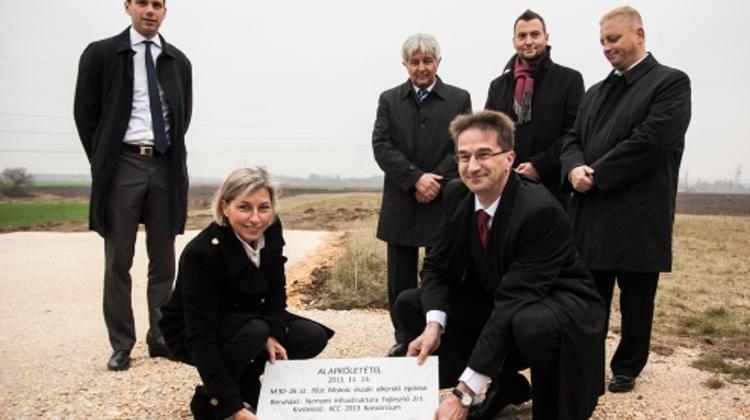 Minister of State for Infrastructure Pál Völner, Member of Parliament of the region Katalin Csöbör and Head of Communications of the National Infrastructure Development Co. Ltd. Dániel Loppert laid the foundation stone of the Miskolc Northern Ring on 13 November 2013. The 2x1 lane stretch of 5.8 km to be funded from the New Széchenyi Plan is to be ready for use by traffic in late spring 2015.

“Ring roads relieve urban stretches, reduce air pollution and noise and make traffic safer and settlements more liveable. During the current financial period of the EU, over 30 cities and modest size communities across the country are to be relieved from significant transit traffic.

Ring roads of almost 210 km have been completed and are to be constructed from Szeged to Nyíregyháza, Komárom to Csongrád and Szeleste to Villány, from a budget of some HUF 195 billion. The developments already completed, ongoing or under preparation improve the living conditions of approximately 1.3 million people.

Supported by the New Széchenyi Plan, the project management contracts for the ring roads of M60 at Pécs, of Mórahalom, Székesfehérvár and Tiszabezdéd are to be signed in the near future”, Pál Völner revealed.

As a result of the investments of the National Infrastructure Development (NID) Co. Ltd., it has once again become possible in villages to cross the road without an accident and the central areas of bigger size communities can become lively again. The construction of ring roads inspires investors and opens up employment for locals.

The Miskolc Ring Road runs around the county seat from the North-East, running between the completed junction of M30 motorway and that of Zsigmond utca (street) in Miskolc. The road is to include a bridge over the river Sajó as well as four iron concrete bridges. The ring road is also to serve as a first-grade flood control dam, providing full protection for Arnót and Felsőzsolca as well.

Around Arnót, on the eastern side of Kis-Sajó, a dam system is to be established. From the northernmost point of the Csorba Lake to the Sajó, a 4500 m long, 120-160 m wide and deep flood drainage pit is to be constructed, to help to channel potential floods into the river. There is a separate dam to protect the deepest area, the roundabout under M30, so the area surrounded by Trunk Road 26 is to be absolutely free of flooding.

Head of communications of NID Ltd. Dániel Loppert said: “Test piling in the area of the bank left to the Sajó bridge has been completed. Test piling for the bridge of the access road from Felsőzsolca and topsoil removal at the circular dam in Arnót are currently underway. The development will bring about a comprehensive solution for flood protection in the region and relieve the inner city of Miskolc from considerable traffic from Trunk Road 26. It is KCC 2013 Consortium responsible for the works, of a value of HUF13.9 billion.”