Smartphones To Conquer Online Shopping in Hungary, Too? 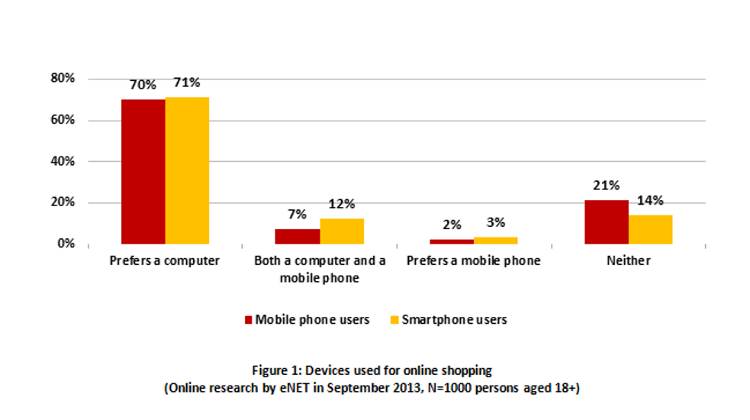 In Hungary too, some consumers now use nothing but their mobile phones to buy goods online. Although their share is a meager 2%, the figure is expected to grow in the near future as smartphones gain ground. These devices offer varied functions and a pleasant user experience. The majority (70%) prefers computers for shopping but more and more people (7%) use both devices at an equal degree. The latest installment of eNET and Telekom’s research series titled “Report on the Internet Economy” focuses on the relationship between online shopping and mobile phone usage.

As many as 47% of regular Internet users aged 18+ have smartphones, and the ratio will continue to increase in the near future, in line with international trends. The possibilities offered by smartphones include online shopping; the question is not whether or not more people will use their mobile phones to buy goods on the Internet but which shopping method users will choose to adopt. From this perspective, the reaction of online vendors to the advent of smartphone shopping is also important. Developing shopping applications for smartphones is one way for webshops to prepare for the market changes; the other involves web pages optimized for mobile phone screens.

eNET’s research conducted in September 2013 heralded the arrival of a small percentage of consumers (2%) who leave their computers behind and do all their online shopping on their mobile phones. A much larger group, 70%, prefer to buy goods online with their computers. It is a common feature of the two groups that they use only one type of device. Between them are the people who use computers and smartphones at an equal degree for online shopping (7%). The remaining 21% use neither device, which means that they are in fact unlikely to be online shoppers.

Compared to conventional mobile phones, smartphones offer a very different experience and change users’ habits. Easier navigation elevates online shopping to an entirely new dimension. Within the group who use only one device to buy goods, there is no significant difference between mobile phone and smartphone users. However, there is more variance in the other two groups. Within smartphone owners, the share of those who use both their phones and their computers for shopping on the Internet is a higher 12%. But a lower 14% use neither device. The reason for the difference is that a smartphone is better suited to the online shopping process than a conventional mobile phone, so it gains importance next to the computer.

The difference between those who prefer computers for shopping (70%) and those who also use mobile phones (7%) is not limited to the size of these groups. Their demographic characteristics are also different. Only 25% of those who buy goods on both computers and mobile phones are older than 40 years. On the other hand, the weight of that age group is a higher 44% amongst those who prefer to shop online on their computers.

September’s online survey by eNET also examined what people bought with their mobile phones. The results indicate a rather limited range of goods; 65% of the respondents chose none of the products listed. Only parking fees, motorway usage fees, and lottery or similar games of chance scored above 10% each. The largest group (15% each) pays for parking and motorway usage; they are followed by those who buy lottery or similar gambling (11%). All other goods listed, such as bonus coupons, travel tickets or entry tickets, scored less than 10% each.

Unsurprisingly, the characteristics of those who pay for parking and motorway usage with their mobile phones are very similar. Both tend to be males aged 30-39 living in Central Hungary, and hold higher education degrees. There are many Central Hungarian men amongst those who play lottery or other games of chance with their mobile phones, too, but in this case the dominant age group is 18-29, and most people are secondary school graduates.

The future: shopping with mobile phones?

Even though shopping with mobile phones constitutes just a narrow slice of the overall online retail trade volume in Hungary, the varied functions of mobile phones (and especially smartphones) definitely point towards expansion, especially as these devices gain ground. As more and more smartphone functions are used every day, the role of online shopping will increase. The “mobile only” trend has already appeared and changed the online shopping habits of some Hungarian consumers. As the phenomenon becomes wide-spread, more and more people will use their phones actively; and that road leads to exclusive mobile phone usage.