All Ten M4 Stations In Budapest Now Have Their Completion Certificates 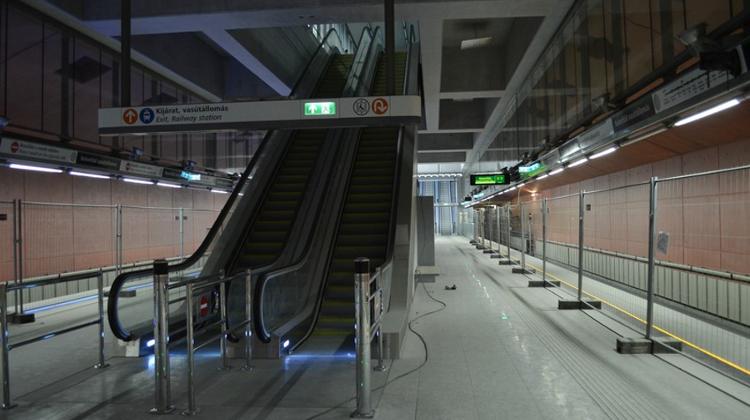 The last station of metro line M4, Kelenföld Railway Station, has received its completion certificate from the National Transport Authority, and so all stations are now ready for the Test in Traffic Operation. Before obtaining the temporary completion certificate for the entire line, the certificates for the stations and the depot had to be had, and the tunnels also have to following the on-going commissioning tests without passengers.

Moreover, all the surface structures, roads and sewers built in connection to the stations have to be licensed. As a result of this complex licensing process, the National Transport Authority (NKH), the Budapest Government Office and the competent water authorities have issued 90% of the permits required.

Under and around Etele tér extraordinary and major underground and surface building works have been under way. Although the construction of the Őrmező exit will be completed only in February and the finishing touches of the subway service area are still in progress, the station of the metro is complete, and could receive the completion certificate. The Kelenföld Railway Station is the Buda-side terminal of the new metro line, and the most important exchange for those coming from the agglomeration area.

The shaping of the surface junction is determined by intermodality, the requirement of simple exchange between different modes of travel. A connecting point is thus being built where taking the metro will be an alternative for those coming by train, car or bus. The public transport in area of the station will be fundamentally reorganized and significantly improved by the handing-over of the new line.

The structure of the station is pure and mostly functional in design, and is over 250 metres long due to the turn-out serving the terminal function, but the station here too is adjusted to the 80-metre length of the trains. The platform level is not very deep, only 16 metres below the surface, where the station has 3 exits.

The expansive subway system connecting the Etele tér side with the Őrmező area and platforms of the railway station enables rapid and fully accessible movement through a total of 27 sets of escalators and 9 lifts. Passengers will have 8 flights of escalators and 2 lifts to go to and come from the metro trains. Fair-face concrete dominates this station, as well, and, apart from the usual lamps, spotlights and mirrors scatter light in its spaces.