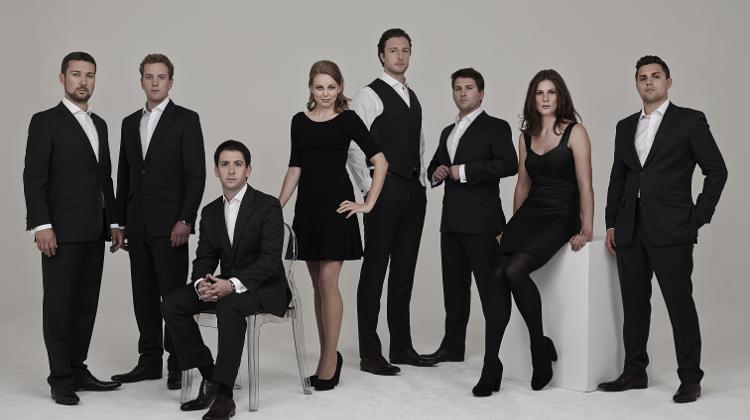 VOCES8, the outstanding vocal ensemble from Britain is coming to its first tour in Hungary, consisting of only three tour dates. To the invitation of Philharmonia Hungary, three Hungarian cities will host the group; they will perform in Veszprém at the Pannon University on 25 March, in Nagykanizsa at the Hevesi Sándor Cultural Centre on 27 March, and for two times, with two different programs in Budapest: on 26 March during the Budapest Spring Festival in the St. Stephen Basilica and on 28 March in the Budapest Music Centre.

A special program will be performed on 28 March at Budapest Music Center ( 1093 Budapest Mátyás utca 8.)

On this event the group will welcome its audience solely with pieces of church music covering a single era, on a venue worthy of the occasion. On the concert evoking the age of the Stuarts the sanctified compositions of the most significant English composers (Gibbons, Weelkes, Ramsey and Tomkins) of the late Renaissance will be performed.

The young ensemble is a high-standard representative and protector of the world renowned and centuries-old vocal traditions of Great Britain. Its male members started their singing career in the choir of the legendary Westminster Abbey. The eight singers with soloist qualities selected their repertoire from five centuries of choral literature, in which Renaissance madrigals, motets, romantic choruses and popular adaptations are following each other in a performance full of feeling and of high artistic standard.

The international tours of the multi-award winning ensemble are covering Europe, the United States, Asia and Africa, they have performed on the stage of Wigmore Hall, Royal Festival Hall, Tokyo Opera City, the Opera House in Tel Aviv, the National Concert Hall in Taipei, the Parisian Cité de la Musique, the Opera House in Dijon, the Concert Hall in Sanghai and the National Centre for the Performing Arts in Beijing. Besides many European cities, the United States, Indonesia, Korea, Dubai, Moscow and Tokyo are also amongst the tour dates in the 2013-2014 concert season.

Classical choral music provides the basis of their repertoire, at the same time their program ranges from Renaissance polyphony to special jazz and pop adaptations, and they have recorded a number of prize-winning discs at Signum Classics.

VOCES8 operates a new educational workshop series, which enhances creativity and musical performance, and reaches 20.000 people in a year, for which they have been honoured by UNESCO. In the course of their artistic collaborations they have worked together with orchestras such as Philharmonia, the London Philharmonic Orchestra, and the Les Inventions early music ensemble.

Tickets and season tickets are available in the Budapest office of Philharmonia Hungary (1094 Budapest, Páva street 10-12. Phone number: +36 1 302 49 61) and on the site www.jegymester.hu

VOCES8 is one of the most exciting and versatile vocal groups in the world. The multi award-winning ensemble fulfils an international annual touring schedule across Europe, the USA, Asia and Africa. Performance venues include the Wigmore Hall, Royal Festival Hall, Tokyo Opera City, Tel Aviv Opera House, National Concert Hall Taipei, Cite de la Musique in Paris, Dijon Opera House, National Centre for the Performing Arts Beijing and Shanghai Concert Hall. Highlights of the 2013/2014 season include an extensive European concert schedule in addition to tours to the USA, Indonesia, Korea, Dubai, Moscow, and for “La Folle Journee” in Nantes and Tokyo.

With a specialism in classical choral music, the group performs repertoire ranging from Renaissance polyphony to unique Jazz and Pop arrangements. The ensemble regularly commissions and collaborates with world-renowned contemporary composers including Ola Gjeilo, Roxanna Panufnik, Thomas Hewitt Jones, Alexander Levine and Ben Parry. VOCES8 is delighted to be in partnership with the acclaimed arranger, Jim Clements as Arranger in Residence.

With an ongoing programme of recordings and live broadcast, VOCES8 is heard regularly on international television and radio, including Deutschlandradio Kultur, ARTE TV, Radio France Musique, BBC Radio 3 and Classic FM. VOCES8 is a Decca Classics Artist and will release Eventide, its debut album with the label in February 2014. VOCES8 has also recorded a series of award-winning discs for Signum Classics, including ‘Choral Tapestry’, ‘Bach Motets’, ‘Aces High’ and ‘Christmas’. VOCES8 is also an Ambassador for Edition Peters with whom it publishes arrangements and educational material, including the ‘VOCES8 Songbook’ and the ‘VOCES8 Method’.

Outreach and Education are at the core of VOCES8’s work and the group is delighted to be the flagship performance and education ensemble of the charitable music foundation, Voces Cantabiles Music (VCM). The ensemble leads an innovative series of music education workshops reaching 20,000 people annually around the world with the aim of inspiring creativity and excellence through music.

The innovative education work of VCM has received praise from UNESCO. In 2013 VCM established the Gresham Centre in partnership with the Diocese of London, a vocal Centre for Excellence at Sir Christopher Wren’s beautiful St Anne & St Agnes Church, in the City of London. VOCES8 is also resident ensemble at Bedford School, Ardingly College, The Grey Coat Hospital and Milton Abbey.

Artistic collaborations with orchestras have included the Philharmonia, London Philharmonic Orchestra and period ensemble Les Inventions. VOCES8 has received support from Arts Council England, the Musicians Benevolent Fund and the Worshipful Company of Musicians. The group is also grateful for the support of official sponsor, T.M.Lewin.