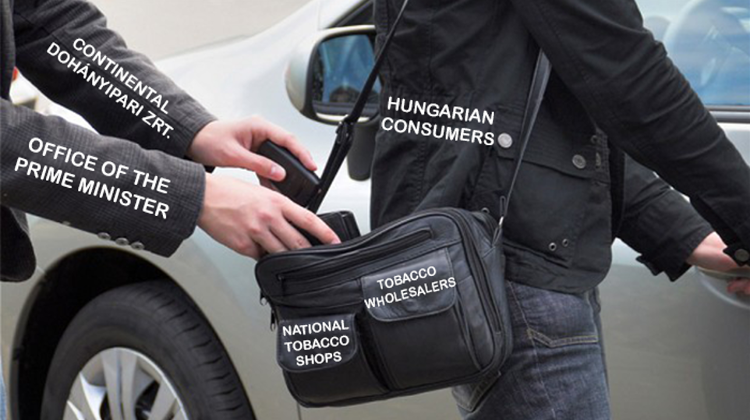 Two days before the Hungarian Foreign Ministry released a two-page document received from the US Embassy citing specific cases of alleged corruption, including the awarding of national tobacco shop franchises, the Office of the Prime Minister run by Chancellor János Lázár distributed a draft bill on “Tobacco product retailing integration”, writes 444.hu. Ministries were given 48 hours to offer their opinion.

The bill provides for a new “supplier” to be inserted in the tobacco product supply chain–one which daily newsportal 444.hu believes “could make HUF 5-6 billion (USD 20 – 24 million) a year without risk”. The draft bill provides for the government to choose a winner from a narrow circle of candidates according to unusually strict criteria without issuing a public tender.

The supplier, in turn, will purchase tobacco products from wholesalers, who will no longer be permitted to sell directly to retailers.

The bill gives the “supplier” a month to pay wholesalers for products delivered to retailers. Given the HUF 400 billion (USD 1.6 billion) market for tobacco products in Hungary, the supplier stands to make HUF 4 billion (USD 16 million) a year in interest alone, calculates 444.hu.

The bill provides for the government to choose a concessioner (1) dealing in tobacco wholesaling for at least 15 years, (2) never owing more than half a million in back taxes, and (3) never punished for more than HUF 20 million since 2005.

According to 444.hu the strict criteria rule out the two large American tobacco companies operating in Hungary, Philip Morris and BAT, both of which have been required to pay fines exceeding HUF 20 million since 2005.

444.hu believes the strict criteria are custom-tailored for Hodmezóvásárhely-based tobacco wholesaler Continental Dohányipari Zrt., whose owners are reportedly close friends of former Hódmezővásárhely mayor János Lázár. 444.hu points out Continental’s owners and their relatives won nearly 10 percent of all national tobacco shop franchises awarded in 2012. Furthermore, it was later revealed that the initial version of the tobacco law submitted to the European Commission was drafted on the computer of Continental Zrt. owner János Sánta.

The original tobacco law itself was subsequently submitted by János Lázár to parliament. The law nationalized tobacco retailing, effectively stripping over 30,000 retailers, including grocery stores and fuel stations, of the right to sell tobacco products, and awarding it to a few thousand Fidesz supporters and their friends and relatives.

Subsequent modifications to the bill stripped national tobacco franchisees of the right to operate on the premises of hypermarkets or petrol stations.

Apart from Hódmezővásárhely-based Continental Zrt., another big beneficiary of the tobacco law was Hungarian grocery store chain CBA, which succeeded in obtaining a national tobacco franchise for nearly every one of its grocery stores.