PM's Office: "We Must Be Better Hungarians" 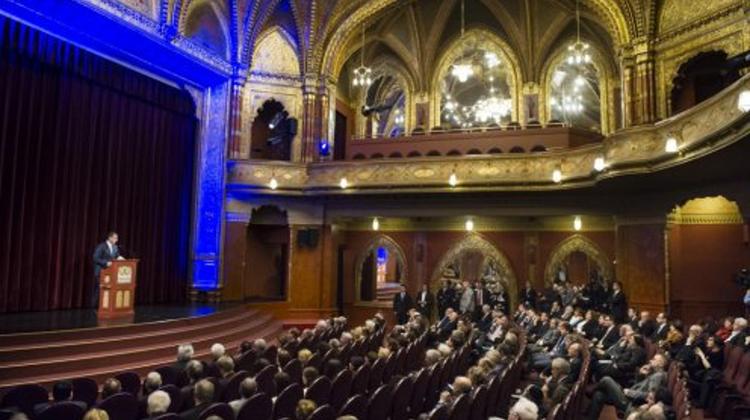 In a speech given on the Memorial Day for Hungarian Victims of the Holocaust, János Lázár said that “the nation is more than just a community of interests: the nation is a community of fates”. (You can turn the English subtitle on by clicking on the "captions" icon at the right bottom of the video.)

At the remembrance ceremony held in the Uránia National Film Theatre, Budapest, the Minister of the Prime Minister’s Office evoked the memory of Richter Gedeon, declaring that “We must be better Hungarians: it is our duty, this is what we are reminded of by the fate of the pharmacist executed by members of the Arrow Cross – a man who was a true patriot and a role model both in peace and war.”

According to Mr. Lázár, today we must not remain silent and passive in the face of vicious ideologies in Hungary. He pointed out that, after what happened in the winter of 1944 on the banks of the Danube in Pest or at Auschwitz, in the Hungarian language anti-Semitic or anti-Roma insults can never be harmless, and intimidating denigration can likewise never be harmless.

Mr. Lázár said that “we must make no concessions whatever” to the successors of those who dragged our compatriots to the banks of the Danube, or to those “who today spit into the shoes forever abandoned by the murdered victims”.

There is no serum for the treatment of vicious ideologies; there is only one thing that can be done to combat such pathogens, the Minister said: Hungarians today must strengthen “our common immune system”, so that it can defeat the infection in time.

According to Mr. Lázár, recent symptoms have warned us that today, once again, “we cannot be satisfied with our collective immune system”.

It is the responsibility of us all, he said: some try to make problems seem less serious and downplay the signs; others are responsible for exaggerating all the time and crying wolf every day.

He added that some – either through short-sightedness or intent – are responsible for allowing aggressive bigots to show a different face in public: such people hide their tattoos and speak differently in public from the way they do behind closed doors.

Effective measures against the political descendants of the Hungarian Arrow Cross and their present-day equivalents are often difficult to enact as “the politicians of the segregationist party are not the same as those who actually support that party”, Mr. Lázár said, adding that “the majority of them are basically peaceful Hungarians”, who might be hot-headed and disaffected, but not evil in intent.

He said that stigmatization of a party might also stigmatize those people, and it cannot be in the interest of a democrat today “to push people who are at heart decent Hungarians into the same camp as the hatemongers.”

Mr. Lázár called for exposure of the “public figures wearing masks”, so that it becomes clear to everybody who they really are, before entrusting them with people’s futures and the country’s future.

“The better future they promise is in fact nothing but the squalid past”, he declared.

In his remembrance speech, Mr. Lázár also mentioned that every Hungarian knows the name of the father of the Hungarian pharmaceutical industry, Gedeon Richter; but his life story is not well-known.

He described Gedeon Richter as a real patriot and a role model in peace and war. he said that the reason Hungarians must remember the story of Gedeon Richter and his compatriots on the Memorial Day of their national tragedy, the Holocaust, is not simply the need to “give ourselves over to the quiet grief or the collective remorse kept for public holidays”. All this is necessary, he said, but not enough: more than that is owed.

Today, in 2015, he said, “we must be better Hungarians”. This is Hungarians’ responsibility, and it is what the life and tragic death of Gedeon Richter remind them of, Mr. Lázár said.