Research: What Do The Hungarian Internet Users Think About Autists? 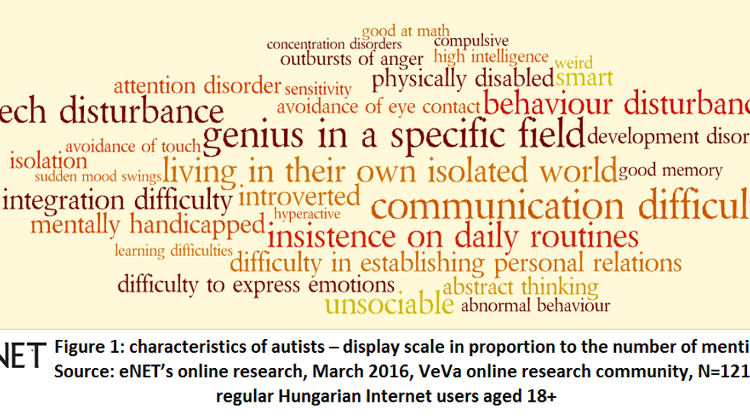 One in 100 persons is autistic in Hungary. You have probably met autists on the bus, in the street, or at school; you just did not recognise why they were so strange. What occurs to you when you hear the word “autism”? Are all autists geniuses in some areas, like the character played by Dustin Hoffman in Rain Man? Would you welcome them around you? One thing is certain: knowledge makes you more tolerant. The latest research by eNET – Telekom probes the knowledge and attitudes of adult Internet users concerning autism.

Autism – the first impressions
The first thing that occurs to most people when they think of autists is that they have communication difficulties or exhibit genius in specific areas. The positive characteristics mentioned by the respondents are also related to genius (smart, intelligent, good memory, good at math), while the perceived weaknesses are focused on communication and social life. In fact, autism is a very complex set of symptoms, a varied spectrum disorder that can be present at any intelligence level.

Facts and myths about autism
Autism is a congenital development disorder that “always affects the areas of mutual communication and social behaviour, and goes together with the rigidity of cognition and behaviour”, albeit in various forms and to various degrees. (Autistic Art – Mosoly Otthon /“Smiling Home”/ Public Utility Foundation).

Nine out of ten respondents have heard about autism, and two out of ten know an autist; still, there is much uncertainty as to the reasons and consequences of this condition. Some 91% of those who have heard about autism think, correctly enough, that autistic people have behaviour problems (e.g. they are loud or unwilling to shake hands); according to 82%, they also have trouble learning.

And 50% are of the opinion that an autist has a mental illness, while the other half of the respondents opine that autism is a mental development disorder. (Autism is accompanied by mental retardation in some 40% of the cases.) Presumably because of films, books or plays about autism, or information about famous autistic scientists and artists, 78% of the respondents think that an autist has a special ability.

72% know works (primarily films) related to the topic, notably Rain Man and Mercury Rising. But only some autists have special abilities, and it’s important to note that autism comes with an uneven profile of abilities, i.e. outstanding skills in some areas but grave underdevelopment in other fields.

In the theories concerning the reasons for autism, hereditary factors are deemed important. But just one fourth of those respondents who have heard about autism agree with this. Then again, most survey participants agree with the latest medical consensus that autism is not caused by vaccination, environmental factors, or a poor family environment.

Six out of ten respondents are aware that autism is currently incurable, and eight know about therapies that may improve the skills and life quality of autists. One third of the survey participants are of the opinion that autists are capable of living on their own, but 93% consider social assistance necessary.

In the current approach, a handicap means an impediment of a person’s social involvement; consequently, a handicap is not only a personal but also a social responsibility. This approach is also reflected by the research results: half of the respondents view autism primarily as a family or social problem, and fewer people consider it as a health care, education or employment issue. And only one in ten people perceives it as a personal problem. About 75% of the survey participants think that residential placement in a centre for autists is not the best solution from the perspective of either autistic persons or their family members.

Compared to other handicaps necessitating special education (learning difficulties, mental handicaps, specific language disorders), it is autistic persons who are employed the least frequently according to research conducted in the United States. According to the Hungarian respondents, autistic adults may fare best in arts necessitating “special skills”, as well as in software programing which requires strong mathematical knowledge.

Private relationships and child-bearing are important aspects of our lives but are still deemed taboo subjects when it comes to handicapped persons. An autist can have a romantic relationship just like anyone else, say 38% of the respondents. However, having children is a more delicate issue, with one quarter opposing the idea.

You, too, may have an autistic acquaintance
Knowledge and experience are important contributors to acceptance. This is supported by the fact that people who have autistic acquaintances are more willing to accept an autist as a neighbour, colleague or a child’s classmate than those who have no such direct experience. Similarly, those who know a handicapped person tend to agree more with the statement that a lightly handicapped person can be just as useful in work as a peer living without a handicap.

According to the Hungarian National Association of Autists, there are at least 100,000 autists in Hungary, but only one fifth of them are diagnosed. eNET asked those survey participants who were not aware of having autistic acquaintances whether they knew a person characterised by certain autistic traits.

One tenth of the respondents marked at least four such characteristics perceived in an acquaintance, e.g. an apparent difficulty to establish personal relations, not understanding others’ intentions and feelings, vehement reactions to certain situations for no apparent reason, not liking to be touched, or excessive insistence to daily routines. Naturally, this is not sufficient for a clear diagnosis but shows that we may all have an undiagnosed autistic acquaintance.

About the research: eNET interviewed 1212 members (Internet users older than 18 years) of the online research community VeVa.hu in March 2016. The results are representative of the views of adult Hungarian Internet users by gender, age and region.