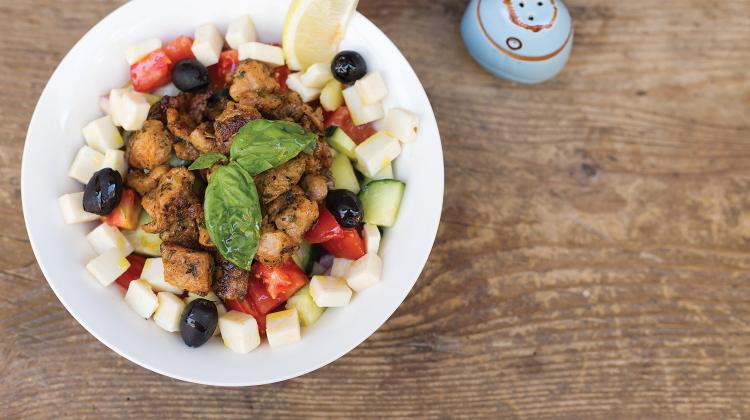 Paprika and goulash immediately come to mind as typical Hungarian cuisine, as deeply rooted as spaghetti in Italy. One thing is for sure: Hungarians like to eat meat. Zsuzsanna Lévai, the young owner of Halkakas fish bistro, has been going her own sweet way, offering fresh product at favourable prices since 2012.

Eat fish at least once a week – so goes the famous nutritional advice. Fish is easy to digest and it provides the body with valuable fatty acids, protein, vitamins and minerals. What’s more, fish dishes are versatile and easy to combine with anything.

Lévai realised the potential in the water creatures early, and she opened the first real fish bistro, or halbisztró, in Budapest in 2012. Being a fisherman’s daughter, she is an expert in her field and she pays special attention to quality: “I had been wanting to open a restaurant in Budapest for a long time, but at the same time I wanted to fill in a niche and I knew that my personal relationship with fishing could be helpful in that.”

When selecting the ingredients for her dishes, Lévai makes it her point to only use Hungarian products. “All the fishes our guests can choose from are fresh Hungarian catches from fish farms that we trust.”

Until now fish was primarily used to cook heavy dishes such as fish soup or fish pots in the traditional Hungarian cuisine. However, at Halkakas the fish is served in a “lighter” way, combined with salad or grilled vegetables for example.

Lévai and her husband put a lot of effort into creating the individual, seasonally changing menu. “We wanted to show Hungarians that fish can be prepared in a healthy way, even in the form of streetfood, such as the Chips and Catfish.”

Friends and acquaintances used to think that she must be mad and they thought she would have a hard time on the Hungarian market with a menu containing only fish dishes. However, the queue outside the lovingly decorated bistro proves they were wrong.

“When we opened in 2012 we were the only restaurant offering fresh fish,” Lévai recalls. “In the beginning we had many Hungarian guests, now in the meantime more and more tourists visit us as well.”

Some other fish restaurants have opened in the past years in Budapest but Halkakas halbisztró is still the only one that offers fresh Hungarian fish, while the others use products from the sea that are imported and have substantial travel behind them when they arrive here.

The most popular fish on the menu card is the catfish. Lévai says one of the most special offers of the house is the sturgeon, which has a strong, unique taste and “feels like beef when you cut it”. Weekly changing lunch menus are only HUF 1300, each served with a soup. They serve dishes such as ratatouille with fish balls, fish lasagne or chili con fish.

This spring Halkakas expanded with a small kitchen on the Buda side. Local DJs play on the terrace while you can enjoy the fresh fish in the form of finger food in the open air and in a green environment. Although Lévai basically only offers fish, since spring they have been catering for meat lovers with Buffalo Burger, prepared with meat from the buffalo farm owned by her father.

“We have introduced this offer primarily for our Hungarian guests,” she says. “We experienced repeatedly that for example at company events there was always someone who does not like fish. In the case of international companies, for example from Germany or Canada, we hardly experience such things. In the case of Hungarian guests I have the feeling that part of them does not value the fresh fish, and part of them can’t differentiate its taste from the frozen products.”

As for the future, a small dream is to open a mobile food truck. “I think that it’s fascinating that in cities such as London and Amsterdam you can buy good fish to eat on the streets.”

Her motto is clear: you can concentrate on Hungarian food and you don’t need products that have already travelled thousands of kilometres. Following the same principle, they do not sell soft drinks in plastic bottles.