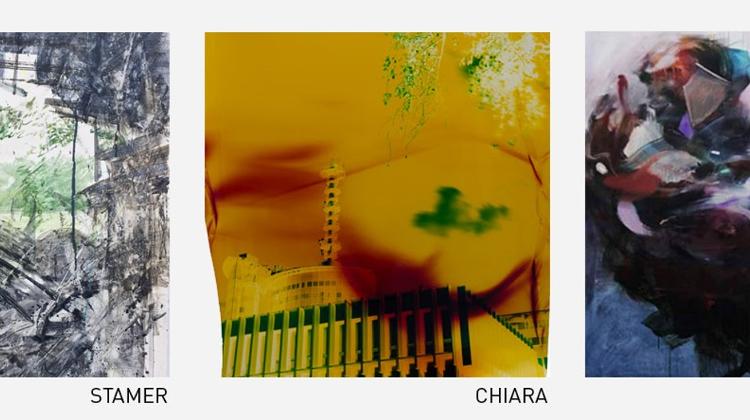 Budapest Art Factory (BAF) is proud to present the art of its May guest artists. Throughout the one-month sojourn, two American artists, John Chiara and Damian Stamer, developed new series of works which will be introduced to the Hungarian public on May 31, 2017, 6-8 pm within a two-person exhibition. As part of the residency program and accompanying event, an emerging talent from Cyprus, Nikolas Antoniou, displays his paintings within the studio show taking place at the guest atelier. As usual, visitors are welcome to view the studios of Dóra Juhász, Márta Kucsora, and Sándor Szász - the artist circle of BAF.

John Chiara’s artistic process involves developing experimental photography, whilst simultaneously creating an event. From discovering the location, building hand-made cameras tailored exclusively to sceneries, to capturing and producing the final image, he meticulously extends photographic expedition. Landscapes and in-between places permeated by collective memory, where he detects an underlying story are what captivate him. Chiara translates the physicality of locales, their identities into a multiplicity of ethereal objects that radiate a sense of place.

Large-scale diptychs exhibited at BAF document the Hungarian capital’s built environment. Photographic opportunities are rooted in facades of eclectic man-made structures, non-apparent designs of both historical sites and corporate architecture that manifest through reversed tonalities. The new series encapsulates the essential character of Budapest which is the duality of past and future, implying ideas of legacy as well as progress.

Damian Stamer combines figurative components and abstract elements in his paintings to record the rustic landscape of his homeland, North Carolina. Personal memories, vistas of vast fields and architecture of the agricultural world serve as reference points to investigate the notion of home. Stamer’s compositions speak of the inherent dichotomy of home by portraying sceneries which carry a strong sense of familiarity while retaining characteristics that can never be fully comprehended.

He experimented with the medium of watercolor extensively for the first time during his Budapest residency. Through gestural brushstrokes, cracks, smears, paint droplets and the amalgam of various media, mysterious interiors of the South emerge. These seemingly forgotten spaces, both confined and spatially complex, tell idiosyncratic stories in which beauty and darkness coalesce.

Nikolas Antoniou paints semi-abstract human figures in indeterminate places with a rich application of color. Devoid of communicating clear narratives or outlining specific demeanors, he seeks for unconventional ways to portray the body. By re-framing the human form through different postures, gestures and presenting them in an unrealistically charged palette, packed with an unsystematic assembly of various objects, he urges the beholder to generate questions regarding the interconnectedness of the compositional elements.

Nikolas Antoniou (b. 1988, Larnaca, Cyprus) graduated from the Department of Fine and Applied Arts, University of Western Macedonia, Greece. After completing his residency at BAF he shows his work at the Alpha CK Gallery, Cyprus, and the Technohoros Art Gallery, Athens in the form of solo exhibitions. He lives and works in Larnaca, Cyprus.

Damian Stamer (b. 1982, Durham, NC) finished his studies at the Barrett, the Honors College at Arizona State University (BFA) and the University of North Carolina at Chapel Hill (MFA). He has received numerous awards; merit-based scholarships enabled him to gain international experience at the State Academy of Art and Design in Stuttgart, Germany and the Hungarian University of Fine Arts in Budapest. His work is represented by SOCO Gallery (Charlotte, NC) and Michael Schultz Gallery (Berlin, Beijing, Seoul). Stamer resides and works in Durham, North Carolina and Brooklyn, New York.

John Chiara and Damian Stamer two-person exhibition
Opening reception: Wednesday, May 31, 2017, 6-8 pm
Introduction by Stefanie Sauska
Opening speech by Christopher Machin, Cultural Attaché, U.S. Embassy
In parallel to the exhibition, the studio show of Nikolas Antoniou will take place in his guest atelier.
On view until June 6 by appointment