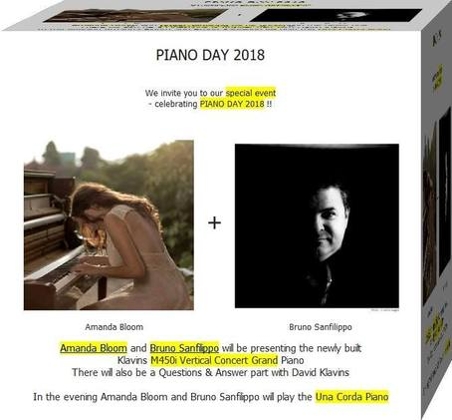 Composer and pianist Bruno Sanfilippo from Spain and Amanda Bloom from Australia will be coming to Vác to present to the public the Klavins M450i Vertical Concert Grand - as part of International Piano Day celebrations for 2018.

Piano Day was invented in March 2015 by Nils Frahm, the famous Berlin composer, in order to fund the building of the M450i Vertical Concert Grand (VCG) by David Klavins.

After 3 years of meticulous crafting, the 4.5 meter high majestic vertical piano will be unveiled for the first time on the 25th of March 2018, in Tolmács, Hungary, before it will be moved to its final destination, Nils Frahm‘s new studio at the Funkhaus Berlin.

David Klavins is a Hungarian based, Latvian futuristic piano builder famous for pushing boundaries and challenging the conservative and traditional piano world. He is known for his invention of the Una Corda, a piano that has one string per note as opposed to the traditional 3, invented as a tool for modern composers that offers a more angelic, subtle tone for their work.

The M450i VCG, however, is a piano that has been built in order to achieve the maximum, fullest sound possible. With 12-foot bass strings and the world’s largest soundboard, the M450i is certainly the fullest, most heroic sounding piano on the planet.

On Sunday the 25th of March at 3.30 pm, interested audiences will be treated to a Master’s Workshop at the M450i VCG in Tolmács (near Rétság), including Q & A’s with David himself answering about his futuristic pianos, followed by performances by Amanda Bloom and Bruno Sanfilippo.

From 7 pm the official concert will take place at the Klavins Piano Manufaktúra workshop in Vác, with Bruno Sanfilippo and Amanda Bloom playing David’s other invention, the Una Corda Piano.

Tickets are 4500 HUF online and 6000 HUF at the door (wine included) and include both the main evening concert and the pre-concert Master’s Workshop.

Bruno Sanfilippo
Bruno Sanfilippo is a pianist and contemporary composer from Buenos Aires, Argentina. He currently resides in Barcelona, Spain. His sound has been described as an exploration of minimalist piano concepts and electro-acoustic music. In 2015, he became one of the main exponents of the LIFEM 2015 festival, specializing in minimalist music.

Amanda Bloom
Amanda Bloom is a pianist, composer and vocalist from Sydney, Australia. Her sound has been described as intensely romantic and melodic with experimental world overtones inspired by her extensive travels and collaborations across India and South-East Asia.

The evening concert is at 8-10 Galcek utca in Vác.