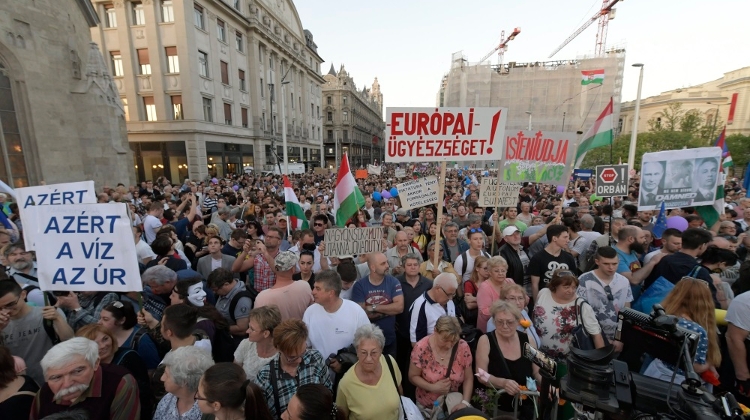 Demonstrators dissatisfied with the state of the rule of law and press freedom in Hungary protested for democracy in the capital on Saturday afternoon.

Organised as a follow-up to last week’s demonstration, the event “2.0 We are the majority! – Another protest for democracy” started in Kossuth Square in front of Parliament.

Protestors made their way to Budapest’s Szabadsajtó (Freedom of the Press) Road to hear speeches.

“[Ruling] Fidesz has watered down the rule of law and stifled the press and this is why they have a two-thirds majority,” organisers of the protest have said.

They said the opposition parties “will also be put to work”, insisting that “they, too, are to blame for getting us to this point”.

“We have to fight together with them for a new, fair and just electoral law and the investigation of corruption cases.”

“We … want to replace a regime,” they said. “The regime of [Prime Minister Viktor] Orbán that is corrupt to the core and endlessly nefarious…” A number of opposition parties were represented at the demonstration.

The protestors waved the national colours, European Union flags, the stripes of the House of Arpad and banners they made themselves.

When the protestors at the front of the demonstration reached Arany János Street proceeding along Bajcsy-Zsilinszky Road, the last ones were starting out from Kossuth Square — a distance of around 1.1km.

Speakers called for the opposition to join together, for civil organisation, and immediate action to unseat the government.

At Szabadsajtó Road, the speakers said the government was only able to stay in power through a campaign of fear, and they called for an end to “the campaign of hate and lies” and for the establishment of a “fair” public media.

They also called for solidarity and a the restoration of a united Hungary.

According to the organisers, the mass of demonstrators spanned from the Pest side of Elizabeth Bridge all the way to Astoria.

On Friday Jobbik’s vice president János Volner announced that his party initiated a national referendum to restore the freedom of the press in Hungary.