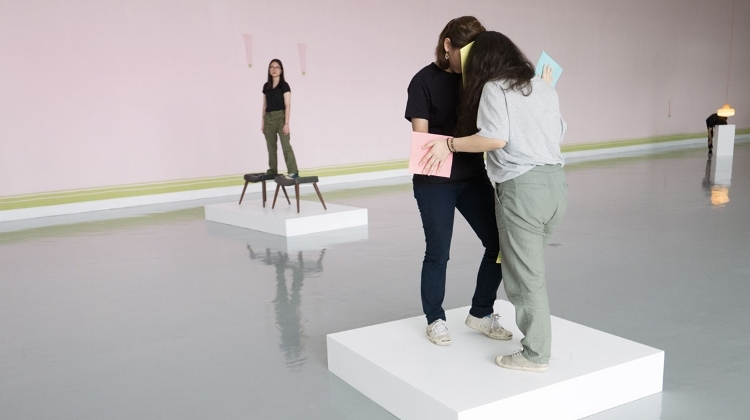 On view until 23 September. “Deception engenders creative emotions.” - How does an object, especially an article, become a statue? How does a huge cardboard box become an overcoat, and what is the viewer’s role in the process of becoming a statue?

World-renowned Austrian artist Erwin Wurm seeks answers to such questions having queried the genre of sculpture for about a quarter of a century.

His “One Minute Sculptures” are based upon our most casual items: slightly transformed garments, furniture, home accessories, or just a means of transport, which are presented by drawings characteristic of “user guides”.

As black lines, they prompt the viewer to act, who, at the time of the act of participation, becomes a creator and actor, and, if only for a moment, an artwork.

His works do not follow the traditional expectations of the genre, what's more, the artist attempts to fundamentally rethink sculpture. With his works, Erwin Wurm asks what happens to everyday objects when they are deprived of their function and, by transforming them, he presents them in a way that makes the viewer part of a true artistic performance, liberating her from her passive “art consumer” position.

In addition to the pieces of the series that have been continuously expanding for ten years, the large-scale exhibition will also feature objects and clothes that, as a result of smaller but specific artistic interventions, are sometimes an absurd, sometimes ironic criticism of consumer society.

Erwin Wurm is a real star, who captivates the audience with his works. His works were displayed in the Austrian Pavilion, at the 57th Venice Biennale.

The exhibition is in line with the Ludwig Museum's ambition to regularly display the artworks presented at the Venice Biennale.