The 26th Sziget Festival will be held on Óbuda Island (Óbudai-sziget) from 8 August to 15 August 2018. BKK Centre for Budapest Transport, the mobility manager of the Hungarian capital, provides higher frequencies on suburban railway line H5, on lines running on Grand Boulevard and also operates vehicles with bigger passenger capacity on night lines 901 and 918, and launches special dedicated boat services to provide access for Sziget visitors to the venue of the festival.

BKK recommends taking public transport to reach the Óbudai-sziget as fast as possible. Visitors in possession of a Sziget-Budapest CityPASS wristband valid from 4 August will be able to use public transport services free-of-charge.

During this year’s Sziget Festival to be held between 8 and 15 August 2018:

From 6 August 2018 (Monday) until the last day of Sziget 2018, a BKK Customer Service Point will be operating at the venue of the Sziget Festival. An Ikarus 260 type bus converted for this event will be found near the main Sziget entrance by the K-híd (bridge).

In addition to being able to purchase different types of public transport tickets, passes and travelcards, you will be able to gather information on our products and services from our colleagues who speak different foreign languages. Our representatives will also be ready to help you with advice on how to reach your destination by public transport in Budapest.

MOL Bubi at the Sziget Festival

In addition to the Customer Service Point, you will be able to get familiar with the MOL Bubi public bike-sharing system and give it a go at the docking station installed at the venue. You will be able to only try the bikes on the venue of the Sziget as bikes can be hired from and returned only to the existing 126 docking stations. You will have to chance to purchase the 24-hour, 72-hour and weekly tickets on the spot as well as get information on the use of the system.

Take public transport to the Sziget Festival on Óbuda island

By making trips of foreign visitors arriving at the Sziget Festival more convenient and faster, BKK operates direct transfer buses between Liszt Ferenc International Airport and Óbudai-sziget on the days of “moving-in” and on the last day of “moving-out”. A dedicated staff and foreign-language brochures at the airport help you inform on transport services.

The fastest transport mode to reach the venue of Sziget Festival 2018, Óbuda Island is suburban railway H5 from which you have to get off at the Filatorigát stop.

Your attention, please! Currently, tramlines 4 and 6 are replaced by buses, due to reconstruction works, as follows:

Please check the map on how to get to the Sziget Festival. 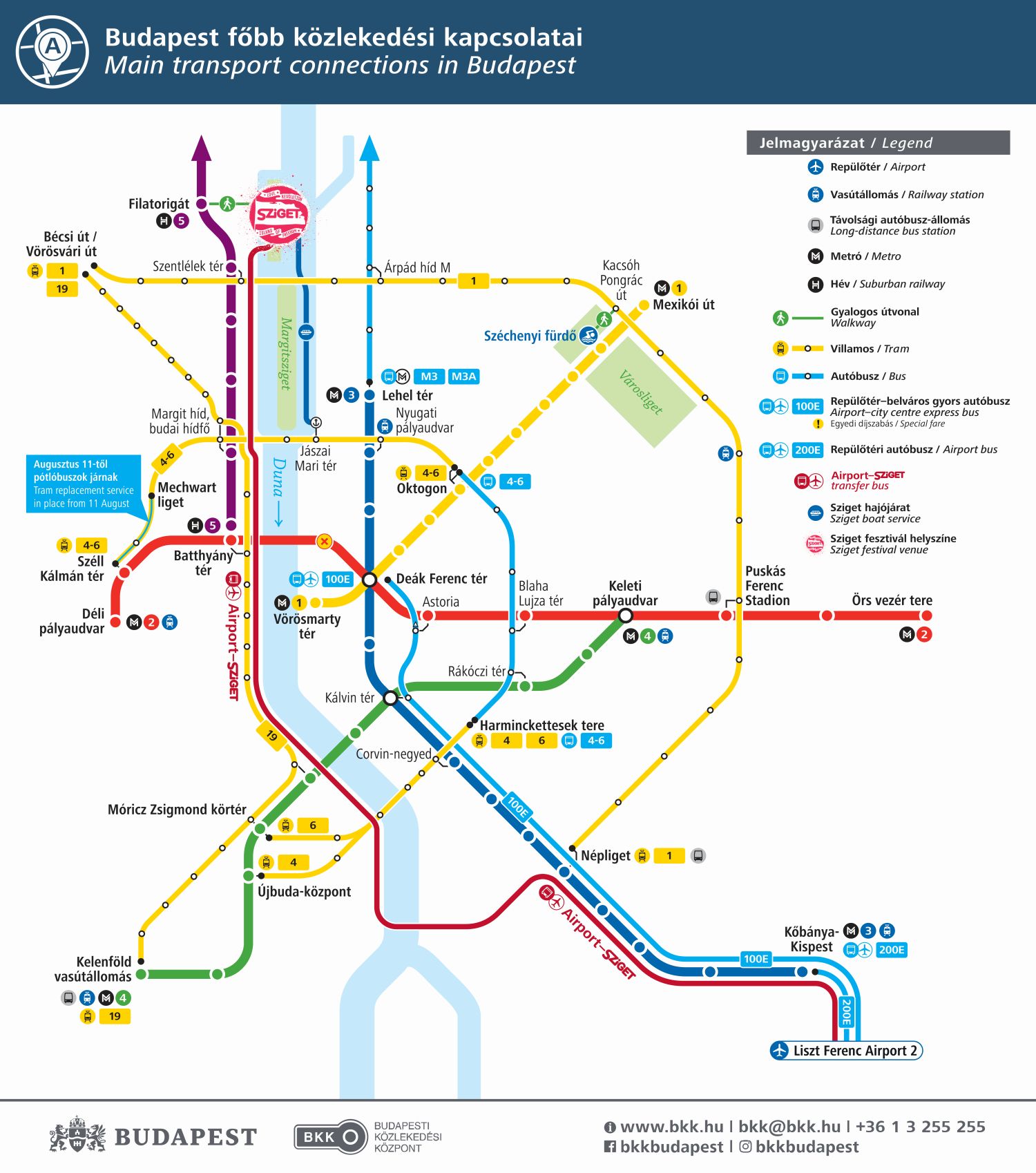 Between 8 August (Wednesday) and 14 August (Tuesday), a dedicated boat service is in operation every 15 minutes between Jászai Mari tér (Margit híd) and Óbudai-sziget. CityPASS holders as well as passengers in possession of public transport tickets and passes purchased at the prices specified by BKK can use the boat service.

Please board the boat at pier 8 at Jászai Mari tér and at the pier of public boat D12 at Óbudai-sziget. The schedule of the line is available here.

Road traffic restrictions in the area of Óbuda island

Only special permit holders will have car access to the area marked by Szentendrei út–Reményi Ede út–Ángel Sanz Briz út–Mozaik utca during the event.

At the request of the Budapest Police, car access will be prohibited to the section of the lower Buda embankment between Halász utca and the Mozaik utca junction – with the help of police cordons – every day from 12:00 to 22:00 between 8 August (Wednesday) and 16 August (Thursday). Car access to the closed section of the embankment is possible for destination traffic only based on the judgement of the police.

Enjoy The Ride To Sziget With City Taxi