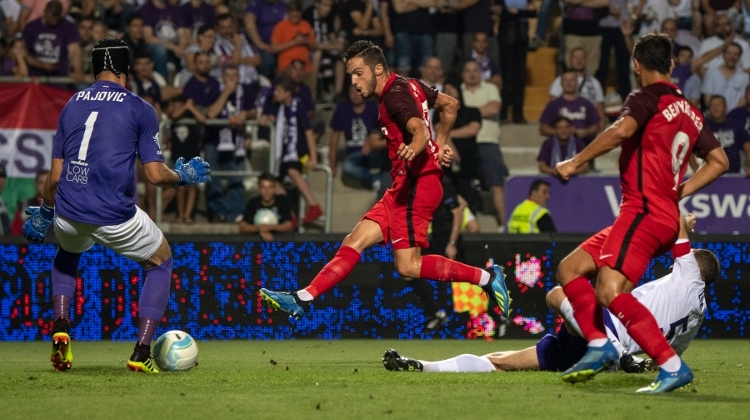 A brave Újpest side fell 3-1 at home to Sevilla despite a tremendous strike from forward Dónát Zsótér while Honvéd suffered a disappointing 2-0 away defeat to Progres of Luxembourg, both results in the Europa League 2nd qualfying round meaning that MOL Vidi are now the only Hungarian club left in European competition this season courtesy of their qualification on Wednesday for the 3rd qualifying round of the UEFA Champions League.

Újpest's Spanish visitors Sevilla, 4-0 up from the first leg in Spain last week, were dealt a blow before kick-off when captain Nico Pareja had to withdraw with an injury sustained in the warm-up, Gabriel Mercado stepping up to replace the midfielder.

That change may have been the reason Újpest started in a more settled fashion, playmaker Dónát Zsótér seeing plenty of the ball early on and even releasing fellow youngster Dániel Nagy down the left wing but he couldn't keep his cross in play.

Sevilla's first real threat came in the 17th minute when a poor clearance by Újpest goalkeeper Filip Pajovic eventually found its way to Sergio Escudero who crossed from the left side for Pablo Sarabia to direct a header just centrimetres wide of the far left post.

A training-ground routine soon took the visitors even closer to the opening goal, a left-wing corner being headed back into the danger zone by Sarabia for Carrico to divert the ball goalwards, but Pajovic was there to catch comfortably.

Back came Újpest and it was Zsótér againat the heart of their first real opportunity, his rasping shot from 18 metres flying a metre wide of the right post.

The hosts threatened again a couple of minutes after a superb pass wide by Alassane Diallo gave Dzenan Burekovic the chance to play the ball into the area for the arriving Nagy but his first-time shot was unluckily deflected behind for a corner.

The hosts would live to rue those misses as Sevilla took the lead in the 35th minute, Escudero advancing on the left before crossing for the arriving Sarabia to dispatch the ball low and firmly back across the goal into the far left side of the Újpest goal.

In truth, the Spanish club, five-time winners of this competition or its predecessors, often proved with their passing, movement and technique that they were a class apart, almost able to score at will, were it not for Újpest's indefatigable fighting spirit, even against the odds.

The Spanish club's second goal came five minutes into the second half though when Pejiño opened up the Újpest defence with an excellent pass to Sarabia who was lurking all alone on the right side of the penalty area, the forward doubling his personal goal tally with a right-footed toe-poke low and just inside the right post.

Sevilla's 2-0 lead didn't affect Újpest battling approach though, Obinna and Nagy both finding opportunites to shoot, albeit without success. Zsótér put that right though in the 77th minute when Obinna jinked inside from the left wing and presented him with a chance to shoot first-time from 20 metres, a chance he took with ruthless aplomb by driving the ball high into the right side of the Sevilla goal to the undiluted delight of the 9,705 fans present inside the Megyeri úti stadium.

A goal was the least Zsótér and a diligent Újpest team deserved, but Sevilla showed their undoubted elite-level quality again when Escudero slalomed his way through the home defence and rifled the ball under Pajovic to re-establish the away team's two-goal lead.

The 3-1 scoreline was how it remained for the rest of the match, Újpest having done all that could be asked for them and Zsótér having given all those present the memory of a top-class Újpest goal they'll remember forever.

Sevilla progress 7-1 on aggregate to the Europa League's third qualifying round where they'll meet either Zalgiris of Lithuania or Vaduz of Liechtenstein, while Újpest must now concentrate on domestic duties starting with the visit of Kisvarda on Sunday.

In the other Europa League mach involving a Hungarian team tonight, Budapest Honvéd lost 2-0 away at Progres Niederkorn of Luxembourg, thus crashing out 2-1 on aggregate following their 1-0 home victory last week.

The damage was done in the 21st minute when Mayron De Almeida put the hosts head and in the 84th minute when Yann Marques scored the crucial game with the game seemingly heading for extra-time.