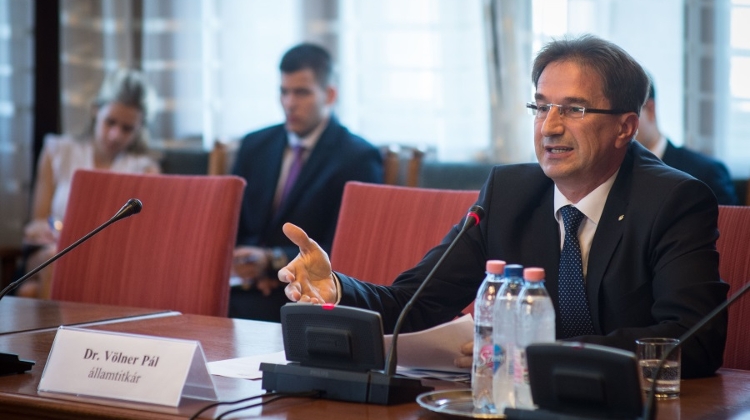 Hungary will not withdraw its “Stop Soros” package of laws or its related constitutional amendment, according to the government’s response to the European Commission regarding the infringement procedure launched over the legislative packages, a justice ministry official said.

The EC launched an infringement procedure against Hungary over the Stop Soros laws and the constitutional amendment in July this year. EC experts raised serious objections about their compatibility with EU laws.

The government sent its response to the EC on Wednesday, state secretary Pál Völner told a press conference. Hungary finds it objectionable that the EC continues to represent an openly pro-migration position instead of being the guardian of the treaties, he said, stressing that the government will not withdraw “the laws protecting the country and Europe”.

Hungary also objects to the EC getting involved in political activities and attacking migration policy measures that promote border protection, he said. Efforts to use Frontex for withdrawing countries’ right to guard their own borders represent the latter, he added.

After the approval of “Stop Soros” and related constitutional amendments, the Open Society Foundations which is “the top organisation in the Soros network” turned to the EC which launched an infringement procedure against Hungary within four weeks, which Völner said was exceptionally quick.

The EC will most probably not find Hungary’s response sufficient and a reasoned opinion will be sent, he added. In response to a question regarding Frontex, he said the organisation’s representatives have been in Hungary as observers for three years and they raised no criticism about the Hungarian border guard service.

If the EC wants to take over border protection tasks, the reason is that “they want to interpret the rules differently” and they would “operate a reception service” which can decide who is allowed to enter the country and who isn’t, he added.

Experience from the past three years has shown that EU officials have a much more liberal approach regarding border protection and “that is a very bad precursor for us to trust them,” he said.

It is fine that those member states that do not have proper border protection, such as Italy and Greece, could use Frontex’s help but it should not be forced on those that can take care of border protection for themselves, Völner added.

In response to a question regarding the Sargentini report, he said Hungary has two months to turn to the court and the government has already started preparing its arguments.