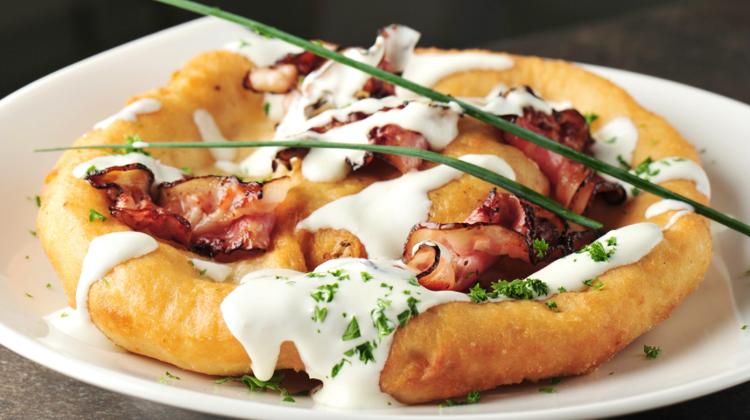 Lángos is the Hungarian name of a flat bread cake type of local delight - today made from a potato-based dough - that's deep-fried to a crisp-yummy perfection and often topped with extras to make it super special, as the pic above shows.

It was originally made from a piece of bread dough that was kept back when baking the family’s bread, and cooked at the front of the oven close to the flame (láng) to provide breakfast for the whole family on baking day.

Spread with cream cheese, it was a great treat. But times have changed, and now few Hungarians bake theif own bread. Lángos made from bread dough is now usually served only at events of a historical nature.

At home, potato-based lángos are served at the evening meal, usually with tea, and sometimes with mulled wine. However, it is most often eaten away from home, since it is Hungary’s cheapest and most popular snack.

Lángos stalls are found wherever there are lots of people – weekly matkets and fairs, on railroad stations, on beaches, and at tourist attractions. Prospective diners are well advised to check the facilities carefully, as it is unfortunately not unknown for unsuspecting customers to be sold old, stale cakes that taste of oil or lard and are at best lukewaim, at worst cold.

For the garlic oil:

Flatten the piece of dough on the palm of your hand and cover with finely chopped fresh dill. Fold the cake in half, then tweak it into shape, and deep-fry.

Make a slightly thicker cake, and crumble a walnut-size piece of ewe’s milk cheese in the center. Fold the cake in half and deep-fry.

Langos with ham I

Pass cooked or raw ham through a grinder, and combine with sour cream to make a smooth, creamy mixture. Place 1—2 teaspoons on the center of the cake, and continue as in the ewe’s milk cheese recipe.

Make the dough with water obtained from boiling a ham instead of the milk, and add a small amount of finely chopped ham.