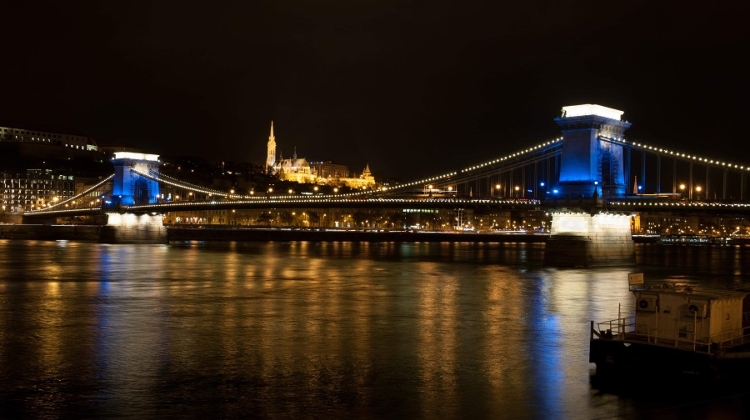 The Széchenyi Chain Bridge in Budapest will be lit up in blue and white on 30 November and 1 December to mark St. Andrew’s Day, the National Day of Scotland.

To make this special occasion even more memorable, British Ambassador to Hungary Iain Lindsay is organising a short ceremony with bagpipers at Eötvös tér near the Pest end of the bridge, between 16:15 and 16:45.

The public and media are welcome to attend.

"It is a particular pleasure and honour for me, as the British Ambassador to Hungary and as a proud Scot, to see Széchenyi Chain Bridge, an iconic Hungarian landmark and a symbol of strong British-Hungarian and Scottish-Hungarian bonds, lit up in the colours of the Saltire, Scotland’s national flag, to mark St Andrew’s Day, the National Day of Scotland” said HM Ambassador Iain Lindsay, OBE.

As it is widely known in Hungary, the construction of Chain Bridge and the nearby tunnel under the Buda Castle-hill was overseen by Edinburgh-born Scottish engineer Adam Clark, following plans by his namesake, English engineer William Tierney Clark.

The festive lighting was initiated by Duncan Graham, President of the St Andrew’s Association of Hungary, and Iain Lindsay, the British Ambassador, approved by the Budapest Mayor’s Office and implemented in co-operation with the British Embassy.

The special lights will be on for two days: 30 November and 1 December, between 16:00 and midnight.

You can also tune in via live broadcasts on Facebook, and on the Instagram page of @ambassadorlindsay!